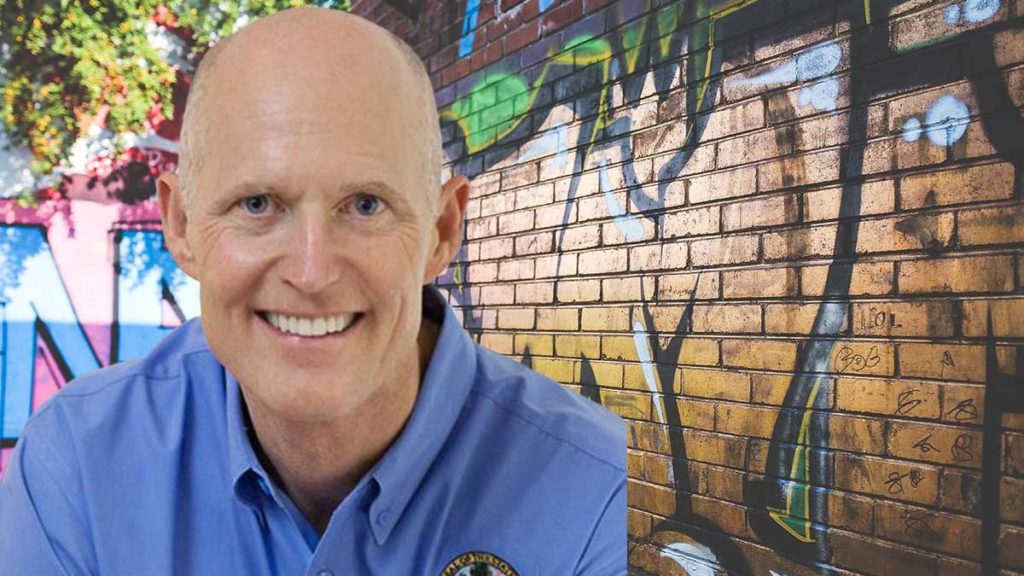 While doing routine cleaning of an artifacts display, a Tampa History Center employee was possessed by an ancient spirit that escaped from a broken vase.

The ancient spirit granted the employee, Jake Boogie, the knowledge necessary to read and translate the symbols hidden in the artifacts that were brought to the museum after a recent South American expedition.

Boogie danced and spoke in tongues for several hours. After nearly suffocating while gargling his own vomit, Boogie announced to a stunned crowd of tourists that Senator Rick Scott (who famously made his money through Medicare/Medicaid fraud and has spent over $100 million electing himself to positions of power) is secretly an ancient alien, and therefore is living in the United States illegally.

The tourists began to speak in their native languages to each other, not understanding what Boogie was saying. At that moment a powerfully bright beam of light appeared from the sky and Senator Scott emerged.

“I can assure you all I am most definitely human,” said Scott, who grabbed a knife and cut his hand in front of everyone in an attempt to convince us that he was a real person. “Would an ancient alien be able to do this without succumbing to the pain?” Scott asked me dramatically.

I watched as a little creature peaked its eyes out from the cut on Scott’s hand, it then gave a little chirp before retreating and stitching his wound closed from the inside.

Scott then began to sing the national anthem, it was very beautiful and the tourists applauded when he was done. Suddenly another scientist came running in to the history center wielding an ancient scroll.

“Senator Rick Scott, I am so glad you are here to witness this, my research has led me to the discovery of a lifetime,” the scientist announced. “What if I told you that there are ancient aliens who are living in the United States illegally?”

Scott then murdered the scientist, eating his whole body in a single bite before transforming into a giant arachnid creature and turning its attention to the tourists in the history center.

“You don’t have to do this Scott!” I pleaded with the grotesque creature that was once Senator Scott. “I know there is still a beautiful old man in there that wants to share policy ideas and debate where my tax dollars should go.”

I watched as a single tear shed from the creature and it transformed back to the human body form of Senator Scott, except now naked and covered in a weird goo.

I went up and licked the goo off of Scott and nursed him back to health until he was able to walk again.

After some time, Senator Scott announced a new immigration plan that will give everyone who wants to be an American a path to citizenship.

“Even if you are an ancient alien who scammed tax payers, you should be forgiven if you are willing to pay a fair share and give the power back to the people,” Scott said before he was assassinated by the deep state shadow government conspirators.