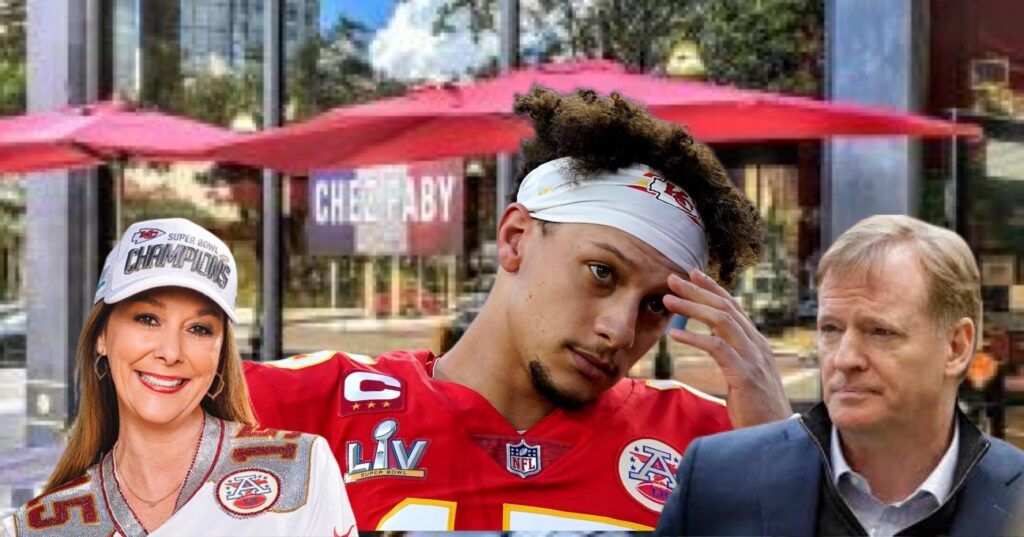 Patrick Mahomes’ mother is furious… and the NFL is taking note.

Regular watchers of the National Football League know that last year’s Super Bowl runners-up, the Kansas City Chiefs, are having a very un-Chiefs-like start. While their defense has been abysmal, many critics have looked to the young team leader, quarterback Patrick Mahomes, as the responsible party. Mahomes is second in the league in interceptions thrown behind only Jets rookie Zach Wilson but these statistics, according to Patrick Mahomes’ mom, are skewed.

Randi Martin would like everyone to know that not all of her son’s interceptions count. Fortunately, the NFL is doing something about it. “Here’s the catch. Did you catch that catch that wasn’t a catch?” she asked the commissioner over tea and crumpets at Chez Faby in downtown Tampa for some reason.

While passes that bounce off of a receivers’ fingertips and into the hands of a defender have perennially counted as interceptions, Mrs. Mahomes is insisting that the league change that “silly little rule.”

“Moooooom” called Mahomes, as he sat at a table nearby listening to his mother give the commissioner a piece of her mind. The pass that kickstarted this uproar bounced off Tyreke Hill’s hands and into the possession of a Washington defender. That pass, thanks to Mahome’s mom, will now be considered an incompletion, despite Washington’s recovery of said pass.

In honor of Mahomes’ baseball playing father, the pass will carry with it an asterisk for the remainder of the season. “We like to treat our star athletes differently” commented Goodell. “Anytime a mom can share some impartial insight, we are more than eager to listen. We have a strict open-door policy here at the National Football League. Despite our tried-and-true tradition of statistically defining what constitutes a completion, interception or fumble, we are always eager to listen to a concerned parent in need.”

Mahomes mom has also pushed to remove some of the losses from Kansas City’s record. The commissioner has promised he’d look into it. Mommahomes’ rallying cry has inspired a bunch of concerned family members and spouses, most notably Gisele Bundchen who has long been outspoken about the way the league has mistreated her husband, Tom Brady. “Interceptions are a terrible thing and we’re trying to have them struck from the record completely.”

Moms of athletes around the world are now banding together to rewrite the record book. Rumors initially swirled that Mrs. Mahomes efforts were disingenuous, that she was only concerned because she started her son on her fantasy team and the interception cost her the week. Further research showed she actually started Aaron Rodgers. Thanks to her outspoken support of her son, the National Association of Jewish Mothers has made Mrs. Mahomes an honorary lifetime member, albeit in the shiksa division.

If you have a valid complaint and would like to petition the NFL to change its record books, contact Roger Goodell, 345 Park Avenue, New York, NY 10154.

View all posts by Chris Humpherys →