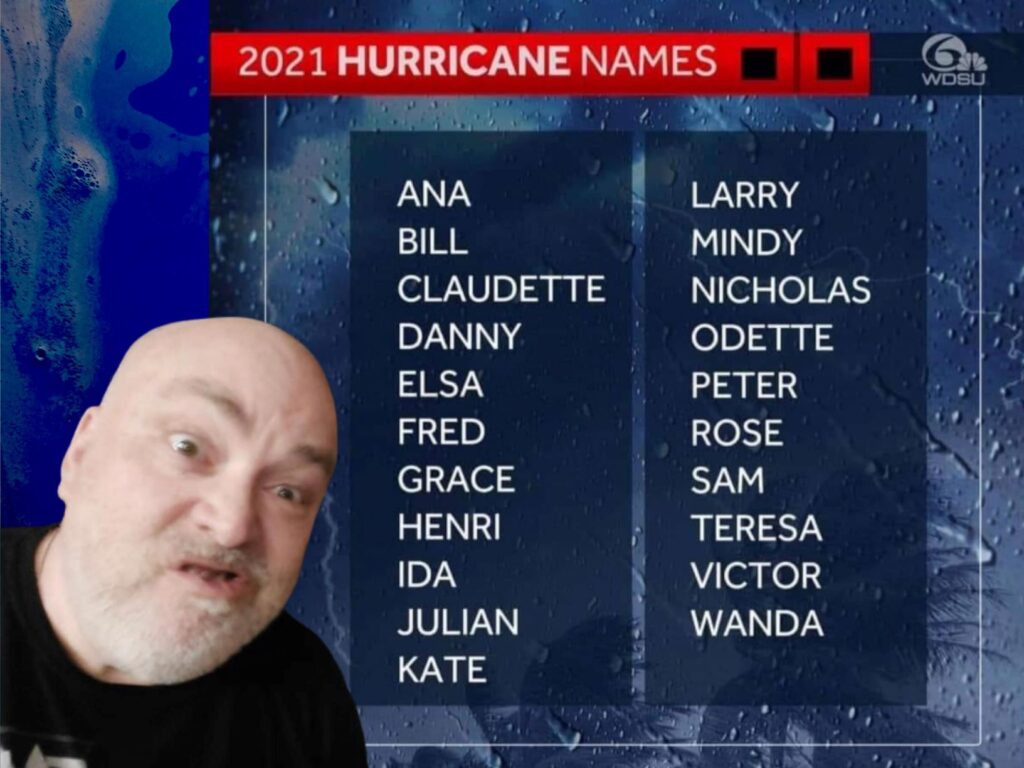 With the 2021 Atlantic hurricane season officially beginning next week (June 1), the World Meteorological Organization (WMO), based in Geneva, Switzerland, has released this year’s hurricane names, and once again ‘Clark’ is not among them, which is bullshit.

It’s bad enough that Clarks can’t walk into a souvenir shop and find a coffee mug or a bike license plate or a pair of Mickey Mouse ears with their name on it. Sure, a very friendly and accommodating “Cast Member” will offer to make you a custom one, but at a cost of $75 and a three-hour wait (I’m guessing; I’ve never tried. It’s easier to assume the worst). The point is, why can’t Clarks just walk in and pick some keepsake up off a shelf like anybody else?

In lieu of that, at least name a storm after us!

Who is the niche audience being served by this list of names? Henri and Ida? There might be six people named Henri or Ida living somewhere on Earth that could be impacted by a hurricane, and none of them in America. Claudette and Odette? Those are both pretty much the same name. Peter and Rose? Banned from baseball but celebrated by the WMO. Yeah, that’s reasonable. Elsa and Wanda? Obvious sell-out to Disney/Marvel… like they need it.

Some people just don’t realize who good they have it while Clarks (and others, I suppose) struggle. People named John or Josh for instance. Maybe every once in a while some smartass barista writes their name incorrectly on a Starbucks cup. That’s as hard as it gets for those guys. Meanwhile, we’re out here, routinely being called “Mark” or “Garth”.

Oh well. I guess if the Tampa Bay Area is going to be ravaged with widespread devastation by a Clark this summer, it won’t be a rotating low-pressure weather system with maximum sustained winds of at least 74mph. You’ve been warned, jerks.