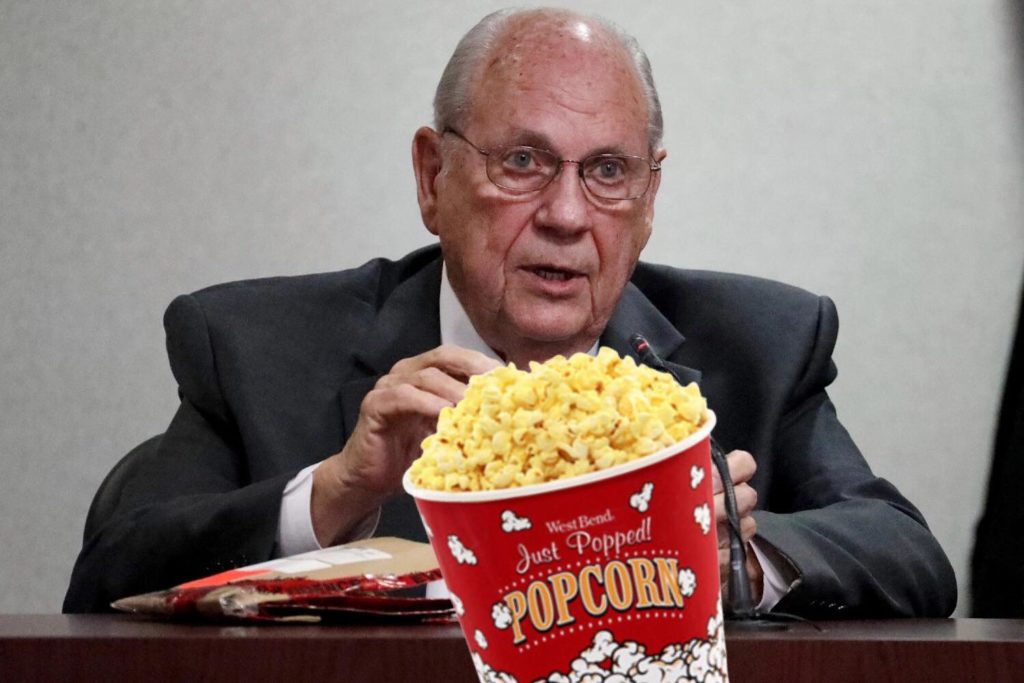 In the surprising acquittal of accused murderer Curtis Reeves late Friday, a Pasco County court has ruled that having popcorn thrown at you justifies killing someone under Florida’s “Stand Your Ground” statute.

“What we’d been led to believe all this time was a delicious snack to munch on during movies is actually a deadly weapon,” said noted snack food and self-defense lawyer Randy Barnberry. “A tub of movie theater popcorn can contain up to 1,090 calories and 2,650 milligrams of sodium. Plus it’s hot! The threat posed in throwing that at someone is obvious and inherent. Faced with that possibility, what choice does someone have aside from pulling out their concealed semi-automatic weapon and shooting the assailant in the chest?”

“At least some of the popcorn is going to hit you in the face and possibly go into your mouth or eyes or even up your nose. You simply can’t expect a 71-year-old man to dodge deadly popped projectiles like Neo in the Matrix,” said Barnberry “Even a 71-year-old man who’s a former police captain presumably trained in recognizing and de-escalating confrontations who participates actively in skydiving, archery and other lifestyle pursuits.”

“Obviously Mr. Reeves was in fear for his life and understandably so. If anything, he should be commended for not immediately opening fire when he saw the popcorn. That’s admirable restraint under the circumstances.”

“When hot buttered death is thrown at you, you really have no option but to end that husband and father’s life at the age of 43,” he added. “I mean, aside from removing yourself from the confrontation of course. However in Florida it’s perfectly legal to stand your ground, including the ground that’s yours in the form of a seat at a movie theater for a couple of hours. Thank God.”

“Sure, you may eventually regret making such a drastic, emotionally-driven decision but that’s what the eight years between the murder… I mean, legally justified act of self defense… and your trial is for,” he said. “Do we really want to live in a society where every dispute isn’t a matter of life or death and adults actually conduct themselves the way we mistakenly believe adults should conduct themselves by not reacting impulsively to a perceived slight and not considering the long term ramifications of their actions? I for one do not, as that would be very bad for my business.”

The verdict is expected to open new debates over the constitutional right to bear popcorn, including permitting, training, ease of access for children, the right to carry it openly in public and whether popcorn purchases at movie theaters should be subject to waiting periods.