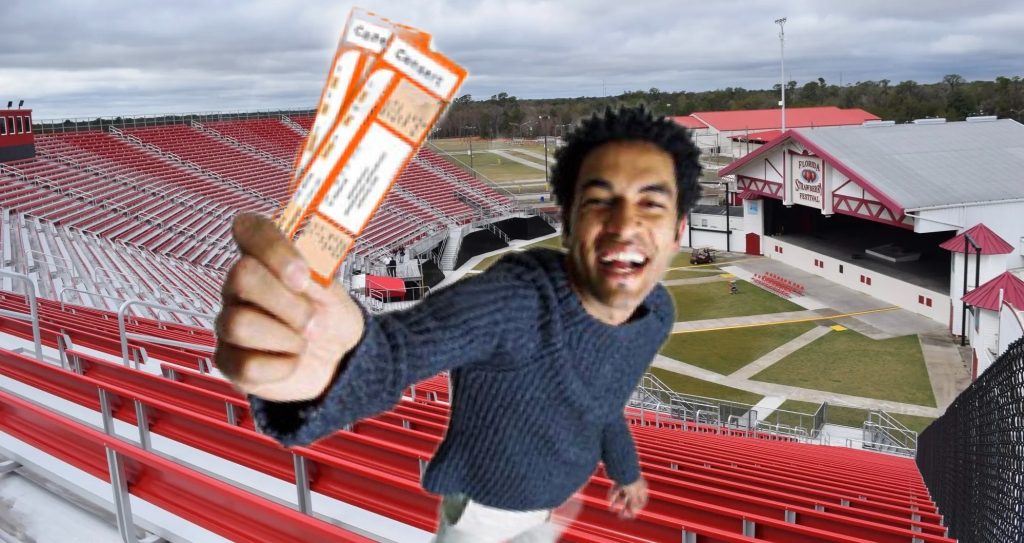 Devin Fishwith, a single man from Plant City who is not very good at attending concerts, is very excited about impressing a woman with the great tickets he has for an upcoming show.

“Man, I can’t wait to see who’s going to be coming with me to this one,” he said. “I’ll tell you that she’s going to have to be a very special lady because these are some very special tickets!”

“They’re for Smashmouth, who is probably the hottest band out there! ‘Hey now, you’re an all star!’ Ha ha! Let’s go!”

“It’s part of the annual Ammonia Festival, which is a somewhat smaller scale event than the Strawberry Festival, held at the same place, but it still draws top-notch talent,” he said. “I mean, come on: Smashmouth!”

He went on to mention, “They’re GA; General Admission. That means we can stand… not sit… anywhere we want!”

I looked at the tickets and noticed they said “Smashmonth,” not “Smashmouth” and pointed that out to him.

I told him that U2 doesn’t do that and he was quiet for a second before saying, “Fuck! You mean I paid $800 to see N2 at the Plant City Softball Stadium??”

← Seffner man creates movement that says White People are pretty goodTampa Zoo to deploy controversial new advertising slogan: “What exactly do you think happens to the animals if you stop coming here?” →