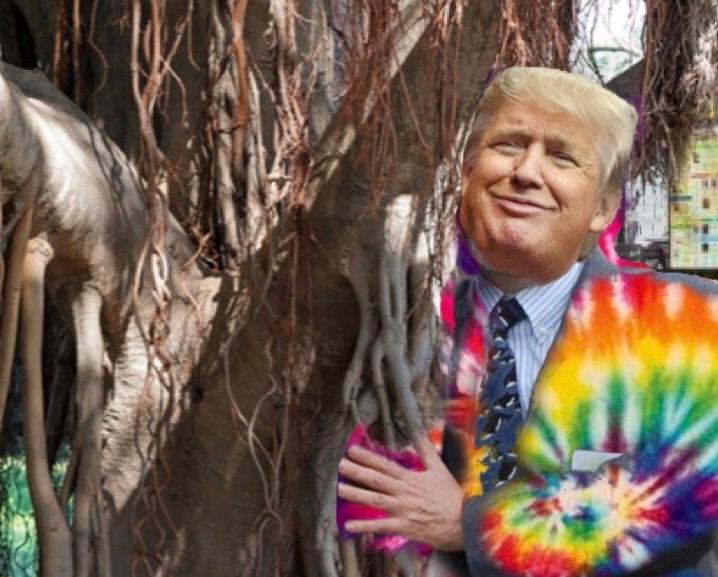 President Trump took a brief lunch break at a pop up gluten free and raw vegan biscuit stand last week, after holding an embarrassing rally in St. Petersburg, Florida. The owner of the stand is Pimento Teaspoon, a Portland transplant, who moved to Florida to find himself after tripping on acid this one time.

President Trump allegedly ordered the dark chocolate raw vegan biscuit, which was to come topped with a chocolate-y glaze. As the story goes, Pimento accidentally topped the biscuit with his shroom infused honey, since it also had a brownish coloration. (Editors Note: Pimento would like to publicly apologize to the vegan community, as he acknowledges that honey is, in fact, not vegan. He has uploaded a 30 minute video to YouTube to apologize for this mistake.)

Footage has been censored from social media of President Trump hugging a big beautiful banyan tree on Beach Drive, barefoot, in a delicate drizzle of rain. President Trump appears to be elated in one particular photo, where a local resident is shown handing him a small bouquet of dandelions. The Trump administration is desperately trying to have these images and videos taken down, though it seems that President Trump feels differently.
Trump seems like he’s had a major spiritual awakening since this mishap. He recently Tweeted at the Proud Boys, “we’re all one.” This tweet also contained a rainbow and the purple unicorn emoji.

In fact, certain conspiracy theorists hypothesize that Trump’s COVID diagnosis was just a deep state agenda to stop Trump from spreading profound spiritual truths. Leaked documents from his latest press address were rumored to have said “as above, so below” and “we are all different manifestations of the same infinite consciousness.”

Since having been diagnosed with COVID, President Trump has taken it easy. He’s taken a liking to live streams from past years at Burning Man and Patchouli Oil. He recently Tweeted that “I now know what Christ Consciousness feels like. It has nothing to do with my own ego. I’ve met my soul, and there’s no going back!”

Looks like the White House could use some more mushrooms.