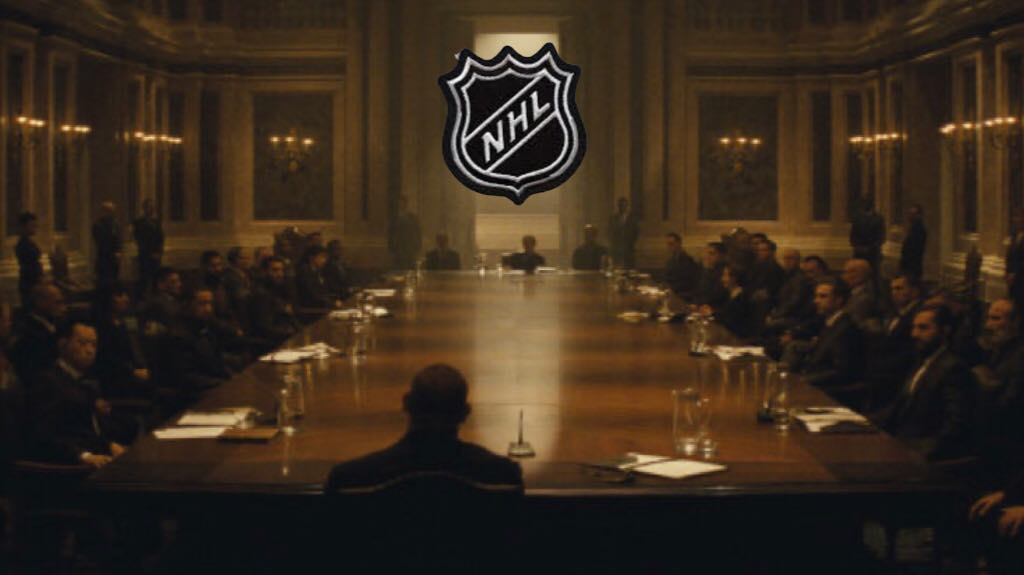 Tampa News Force has uncovered proof that the National Hockey League along with several other shadowy entities with a vested interest have conspired against the New York Islanders on behalf of the Tampa Bay Lightning in order to help the Lightning win yet another Stanley Cup.

We can’t tell you how we obtained this explosive information because we don’t want to get murdered, but here’s a transcript from a meeting held at the NHL’s secret underground bunker in Safety Harbor earlier this month.

Saturday, June 12, 6pm (appx), Safety Harbor, Florida
NHL COMMISSIONER GARY BETTMAN: All right, let’s come to order. We’re here today to discuss our secret plan to promote the Tampa Bay Lightning at the expense of the New York Islanders.
UNKNOWN MAN: Sir, before we start, why are we doing this?
BETTMAN: Because I love the Tampa Bay Lightning and I hate the New York Islanders. In spite of the fact that they’re both members of the NHL to whom I report as an appointed employee, I have a deep-seated personal bias against certain teams for some illogical reason that nobody could ever even attempt to rationalize.
UNKNOWN MAN: Of course. I’m sorry. I wasn’t thinking.
BETTMAN: Now shut up. TV, are you prepared to execute your role in this plan?
PRESIDENT OF ALL TELEVISION: Yes. Our announcers have all been briefed to only ever say nice things about Tampa Bay and never mention New York in a positive light whatsoever. Even though they have absolutely nothing to gain by doing so. Rest assured, whether it’s about what happens during the game, the players involved or even the respective metropolitan regions, not one good thing will ever be said about New York.
UNKNOWN MAN: Sir, I’m sorry to interrupt. But since New York is a much larger television market, the largest in the world, wouldn’t we stand to reap bigger profits if it was the other way around?
BETTMAN: (sighs heavily) You fool. The Tampa Bay Lightning are the Favored Sons of the hockey world. They always have been and they always will be! They’re beloved throughout the nation, as well as Canada, Europe and the Pacific Rim. Everyone knows it. We’ll make so much more money with Tampa Bay playing for the championship than we ever could from any team from New York or anywhere else. It’s basic, obvious economics.
UNKNOWN MAN: I apologize again. I’m new.
BETTMAN: (glares, seethes, long silence) Referees, are you ready?
ALL 68 NHL REFEREES: (in unison) Yes sir. Not one penalty will be called against the Tampa Bay Lightning, as has been the case throughout the regular season and so far in the playoffs. They will be allowed to do whatever they want without fear of reprisal. Meanwhile, we’ll call penalties against the Islanders for doing absolutely nothing wrong at all.
UNKNOWN MAN: Sir, I’m sorry, but I have to ask. Aren’t people going to make a fuss about Nikita Kucherov faking an injury all season, before returning to the lineup just in time for the playoffs, allowing the Lightning to circumvent the salary cap?
BETTMAN: He had hip surgery for fuck’s sake!
UNKNOWN MAN: But what about this recently discovered video footage?

BETTMAN: That’s a commercial from two years ago!
UNKNOWN MAN: No sir, it’s from a Lightning practice last November.
BETTMAN: What is your problem?!?
UNKNOWN MAN: (pulls off latex mask to reveal that he is actually Jimmy Fallon, the Islanders number one, dedicated, diehard, celebrity fan) My “problem” is I just think someone needs to stand up for the poor downtrodden victims of the small, underrepresented village of New York. We have a very loud arena, you know!
BETTMAN: Get him out of here!!
JIMMY FALLON: (screaming as he’s led away by goons) Our building is loud! Our building is loud! You’ll see!! You’ll all see! It’s so loud!!
OTHER UNKNOWN MAN: Sir, now that all is in place for this series, what are our plans if the inevitable champion Tampa Bay Lightning have to face the game’s most venerable franchise, the Montreal Canadiens, in the Stanley Cup Final?
BETTMAN: Oh, that’ll be easy. Everyone knows that the sport of hockey hates Canada and doesn’t want to be associated with it.