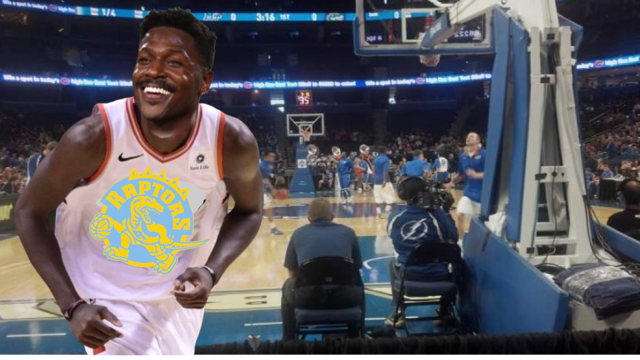 The NBA’s Toronto Raptors, currently operating on an undetermined temporary basis in Tampa, have signed Tampa Bay Buccaneers wide receiver Antonio Brown to a one-year contract for the upcoming season.

Raptors president of basketball operations Masai Ujiri said the team didn’t seek Brown out, that he came to them. “When my administrative assistant said Antonio Brown was on the phone, I thought she was talking about the guy from Stanford who played for the Lakers and has been playing abroad since 2018 and I said ‘tell him I’m not in’. But then I found out it was the football player and I was very interested,” he said. “Sure, he’s not a basketball player per se, but when you have a chance to sign an elite-level athletic specimen like that, you don’t pass it up!”

Brown said he’d never had interest in playing professional basketball before. “When I heard the Raptors were coming here, and playing a couple miles from where we play football, I thought, ‘Why not?’ I’ve never played in a city that had a pro football team and a basketball team before so it’ll be really easy for me to do both.” When it was pointed out that he played in Oakland where the Golden State Warriors play and in New England, home of the Boston Celtics, he replied, “No I didn’t”, and attempted to sexually assault the reporter with some patio furniture.

“The point is, this is something I want to do so I’m doing it”, he said. “If there’s one thing my career in sports has taught me it’s that I can do anything I want.”