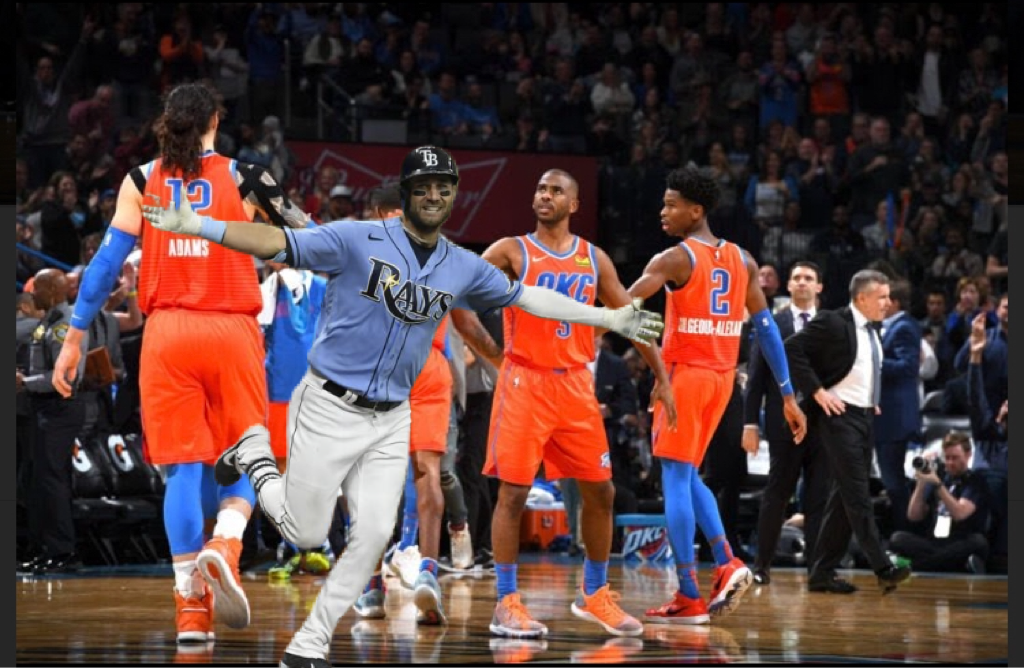 After accidentally arriving at the wrong location in Orlando, the Tampa Bay Rays played a full NBA game against the Oklahoma City Thunder. What was nothing more than a miscommunication between the bus driver and the event coordinator, instead of going to the Disney World Magical Kingdom theme park, the driver went to the Disney sports complex currently housing the NBA bubble, and after a brief verbal spat between Rays players and Thunder players over “What’s better lightning or thunder?” The Rays, defending the honor of their NHL sister team, the Lightning, decided to play a game against the Thunder, taking the place of the LA Lakers, who decided they, “would rather watch this,” than participate in the game themselves.

The Rays got blown out. The first half.

Then came back in the second half to win the game by 2, with a three point shot by Sammy Sosa.

“It feels so good to win the game for my team.” Said Sosa, the retired Cubs player who happened to be on site when the verbal spat took place and sided with the Rays.

“I always wanted to play an NBA game, just one, and I couldn’t have been at a better place at a better time, because this is how dreams come true, I love you Disney!” Sosa screamed as he poured his own bottle of champagne on himself.

(Oh jeez, sorry I just got back to this story a week later and see I didn’t finish it. Damn, it looks like it was going well too, why would I step away from the table when I was so clearly hot? Alright, let’s try to get back in it.)

The Ray’s win will transfer over to LA and will count as an officially recorded W for the Lakers, and it also turned out to be a playoff game, which is even more significant.

“Wait a minute, we weren’t even supposed to be playing the Lakers!” Shouted the Oklahoma Thunder star player who couldn’t be identified because the back of his jersey read, “Courageous and Fearless Provider”

“I guess it’s not worth anything then.” Sighed Sosa.

Then all the Rays players got back on the bus and the Lakers and Thunder walked back into the giant bubble. The mega gelatinous pulsating structure which seemed to live on a life of its’ own.

(I blew it, I should have just finished the story the first time. D**n it!)

Just then I felt Sammy Sosa’s hand on my shoulder.

“I thought I won an official NBA game, but it was nullified because of a technicality. Do you know how much that kills me?” Sosa looked crazed.

“Do you know how much that tears me up inside?” He started pulling me towards him, and I resisted.

He let go, and was embarrassed for his behavior.

“Sorry about that, I don’t know what happened.” He tried to laugh and shrug off.

“I guess you know, I really wish I won an NBA game, the same way you wish you wrote a better article.”

Then he burned the stat sheet of the game he had printed out and I burned this article and the fire alarm went off and sprinklers got us all wet and took a while to even put out the fire, it raged for a little bit before the water soaked. Anyways, that’s all folks! (Looney Toons outro plays while I Toosie slide my way out of frame.)