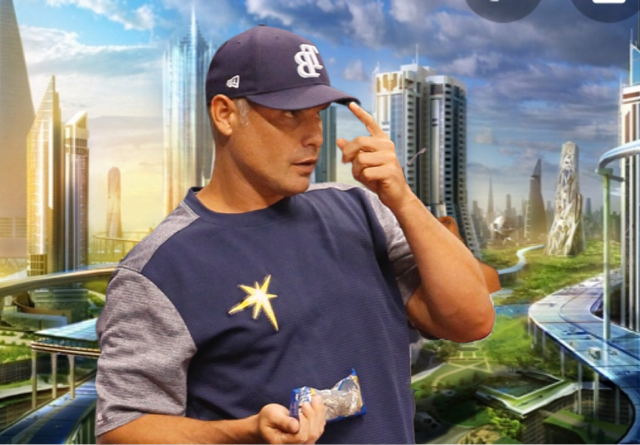 The Tampa Bay Rays lost 3-1 to the Brooklyn Dodgers in Game 6 of the alternate 2020 World Series, ending their bid for an otherworld championship in Blixxarp-7, a hypothetical self-contained plane of existence, co-existing with our own.

In Blixxarp-7, events and objects closely mirror those that we consider to be reality in this dimension, with a few slight and subtle differences. For example, parallel Tropicana Field is widely regarded as a state-of-the-art facility with luxury amenities where fans routinely sell out all home games and I am highly successful and irresistibly attractive to women.

Kevin Cash is the manager of the Rays, just like he is here. However, in that World Series, he left starting pitcher Blake Snell in the game after giving up just his second hit of the game, a single to Austin Barnes. At the time, the Rays were leading 1-0 with one out in the fifth inning. “Parasnellzilla was cruising,” he said. “There’s no way anybody I brought in could have done a better job. I went to the mound to talk to him after he gave up that second hit but the idea of taking him out at that point never entered my mind.”

Unfortunately, on the very first pitch after that conference, Snell hung a slider to Mookie Betts who crushed it for a two-run homer, plating the tying and eventual winning runs.

Parallel universe fans were perplexed at Cash’s decision to leave Snell in the game and absolutely livid at the results. “What in the hell was he thinking?!? Snell was beginning his third time through the line-up!”, says lifelong baseball expert who never managed or even played the game at any meaningful level Goober McDipshit of St. Otherpetersburg. “Did he really think Dodgers hitters weren’t going to make adjustments as the game progressed? This is proof that analytics always work to absolute perfection in baseball.”

As upset and disappointed in the outcome of the World Series as Rays fans are in our universe, those feelings are even more intense in Blixxarp-7. “Of course we’re upset”, said McDipshit. “As citizens of a world with a fully functional government that is actually committed to serving the public and an upcoming presidential election between two candidates who are both capable, competent women who exemplify integrity and compassion, something like blowing a shot at winning a World Series is going to get a lot of scrutiny.”

“We’ll get over it, of course,” he added as he took a deep drag off a cigarette, the parallel universe’s primary source of Vitamin C. “It’s just such a letdown after sweeping the Expos in last year’s World Series.”