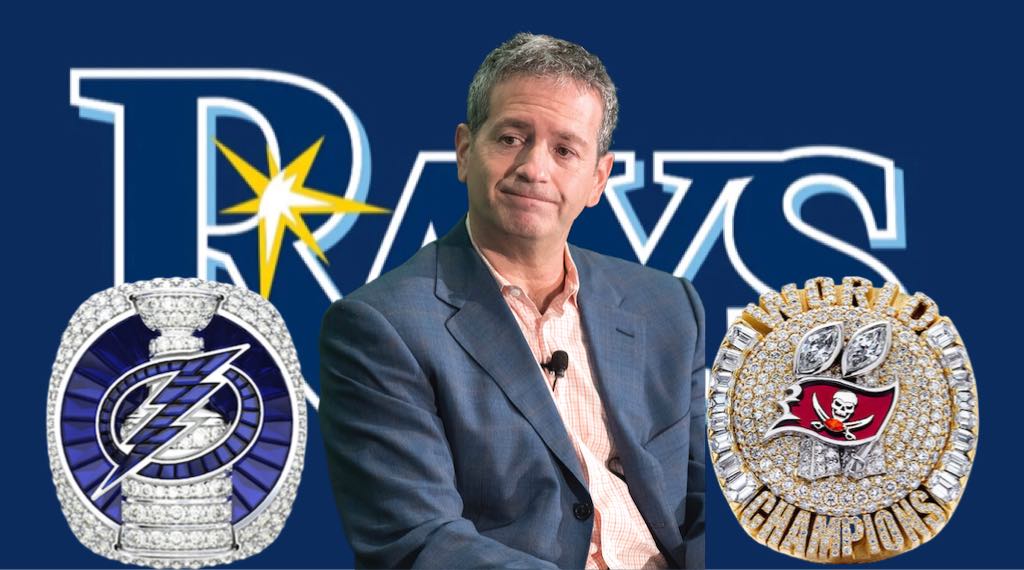 As August approaches with the Tampa Bay Rays once again in serious contention for a playoff berth, especially after acquiring slugger Nelson Cruz in a trade with the Minnesota Twins Thursday, Rays management is watching the escalating championship ring race between Tampa Bay’s two defending world champion sports franchises, the Buccaneers and Lightning.

“You have to admit we have a shot”, said Rays owner Stu Sternberg. “We’re the defending AL champs and we’re currently in a real good position to return to the postseason again this year. The prospect of having to get championship rings for our players, coaches and staff is something we have to start thinking about. It’s at least a serious possibility.”

Thursday, the Buccaneers received their rings in celebration of their 31-9 win over the Kansas City Chiefs in Super Bowl LV at Raymond James Stadium in Tampa in February. Their rings contain 15 carats of white diamond and 14 karat yellow and white gold and features a twist-off top that reveals a whole separate level featuring a hand-engraved, three-dimensional replica of Raymond James Stadium.

Earlier this spring, the Tampa Bay Lightning received their rings for beating the Dallas Stars to win the 2019-20 Stanley Cup, with each ring featuring 25 carats of gemstones, including 557 diamonds and 81 sapphires. The Stanley Cup in the center of the ring alone is made up of 79 diamonds. The Lightning logo is made of 30 sapphires. The diamond-filled Cup turns to reveal a single black diamond that represents a puck.

They’re due to receive rings for repeating as champions, having beaten the Montreal Canadiens four games to one to win the 2020-21 title.

“Cripes, they just keep raising the damn bar with these things”, exclaimed Sternberg. “It’s not enough that they have to be totally encrusted in jewels, they have to be fidget spinners and dioramas too? How’s (Lightning owner Jeff) Vinik gonna top this Bucs ring? I don’t know but you know he will.”

This puts the Rays, one of the lowest revenue generating franchises in professional sports in a difficult position, in terms of public perception regarding any championship ring they might produce.

“Right off the bat, plastic isn’t even an option. We can’t even consider making them out of plastic, in spite of how durable they would be and how that would be good for the environment. That’s off the table”, he said. “Right? That’s not an option, is it? No, of course not. That was just a joke. Like how the players would purchase their rings from gumball machines we would install in the clubhouse. Also a joke. Totally feasible and effective idea but just a joke. Ha ha!”

“Does everybody get one? Even some benchwarmer hitting under .200? Even some sales guy who barely hits quota??”, he continued, musing aloud. “Yes, of course. Everybody would get one. All contribute to the success, even those who don’t contribute that much. Of course everyone gets a ring. Everyone. No question. Just joking around again. Relax, everybody. We got this.”

“But seriously, does anybody know how to set up a GoFundMe?”