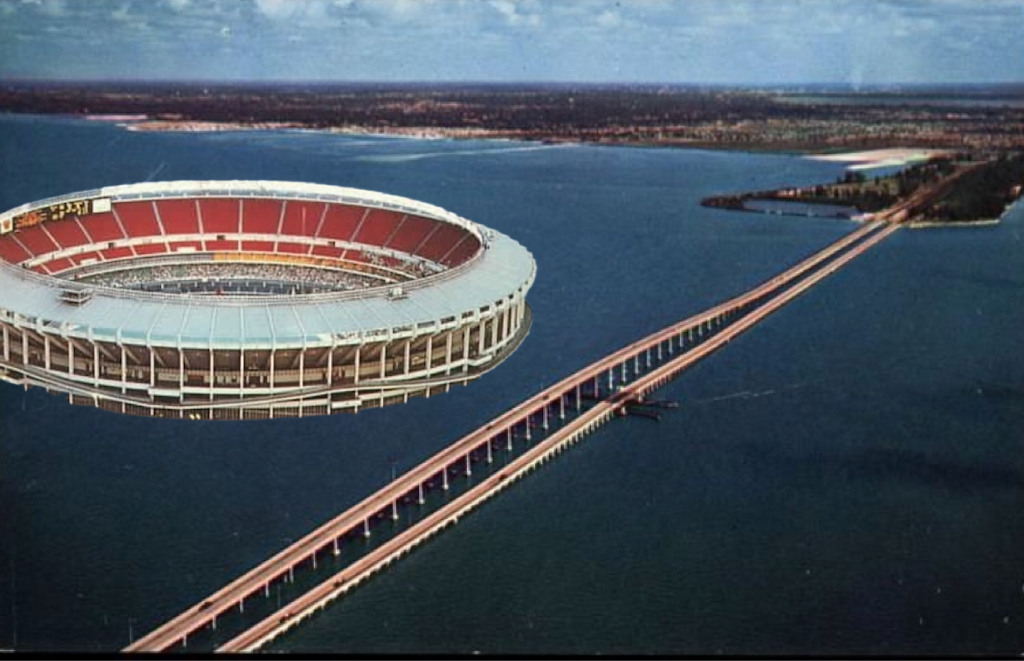 The Tampa Bay area finally has an approved plan for a new baseball stadium. The stadium will be an iconic and unique floating stadium on Tampa Bay. The plan was announced this morning at a press conference at Major League Baseball’s headquarters.

Sports fans all over the Bay Area are breathing a huge sigh of relief. This saves us from sharing the team or even worse losing the team to Montreal. “This was a close call with Montreal looming,” said Kevin Kiermeier.

The idea came from a long time Rays fan Wilbur Harrington. He approached the Rays, St. Pete, Tampa, and Major League Baseball yesterday. They all quickly agreed. The cost savings will be immense as no land is needed for the stadium. We only need a parking lot on the Tampa side and the St Pete side with ferry service. Submarines will be used to transport people from Clearwater.

The stadium will float between the Howard Frankland and Gandy Bridges. The bridges will keep the stadium from being blown away in a storm. A floating stadium was actually used as a soccer stadium between England and France in the 1970’s. Unfortunately, the stadium wasn’t secured properly and was lost in the Atlantic Ocean during an important match. It was found 4 months later. The match was still tied 0 to 0 in an overtime. The fans were upset because they ran out of beer.

The cost of the stadium will be reduced even more because the water temperature will help stabilize the climate in the building. There is also no need for a dome or retractable rood. The stadium will float on 300,000 pool rafts discarded by tourists at local hotels.

The stadium plan has been met with enthusiasm by all parties. More details will be released soon on the water breaking ceremony.