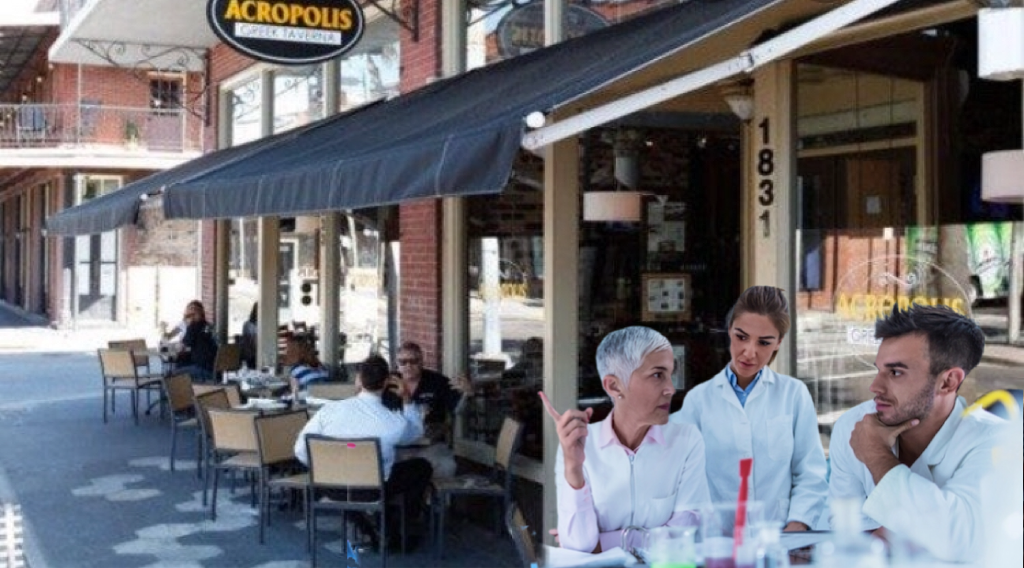 An exhaustive study by research scientists and grad students from the University of South Florida has determined that 7th Avenue (La Septima), Ybor City’s main thoroughfare, is made up mostly of bodily fluids.

“To be clear, we’re talking about the physical make-up of the street itself”, says Margot Hydrocloset, lead USF researcher from her team’s on-site lab located at an outdoor table at the Acropolis Greek Taverna. “This isn’t an editorial comment on the business establishments along the street, like this one, nor the people who operate or patronize them.”

She went on to explain, “Ybor was founded as an independent town in 1885, annexed by the city of Tampa in 1887 populated mainly by Spanish, Italian and Cuban immigrants who worked in the cigar factories. Around the turn of the century, the city became more modern with paved streets, first with hand-laid bricks and later cement and asphalt.”

“Then in the late 1980s, it became popular for nightlife and even more so in the 1990s, becoming a popular destination for tourists and partyers alike, with busy nightclubs catering to all kinds of tastes until the wee hours.”

The end result of all that activity is that now 7th Avenue is coated with millions of layers of bodily fluids accumulating over the years. “Our calculations reveal that it’s now only 32% common street-building material” she says. “With a majority of the remaining 68% a mixture of sweat, saliva, urine, feces, vomit, blood and what I would be most comfortable describing as ‘other’. Plus, about 1.5% chicken excrement.”

A residual side effect of this accumulation is that Ybor City’s elevation is approximately 36’ above sea level. “It should probably be closer to 34’, 4 “, she says.

Further, she adds, “There are some small sections of 7th where the actual street has rotted away beneath and all that separates vehicle and pedestrian traffic from a soft sand base is the firm shell of filthy build-up in the shape of the street that once laid beneath”, punctuating that with a loud, reflexive belch. “Sorry.”

When asked what the purpose of this study was, she said, “We needed a quantifiable measurement of reference to note how disgusting Ybor is. I think we have it”, as she turned away from her half-eaten Pastrami Smoked Salmon Salad.