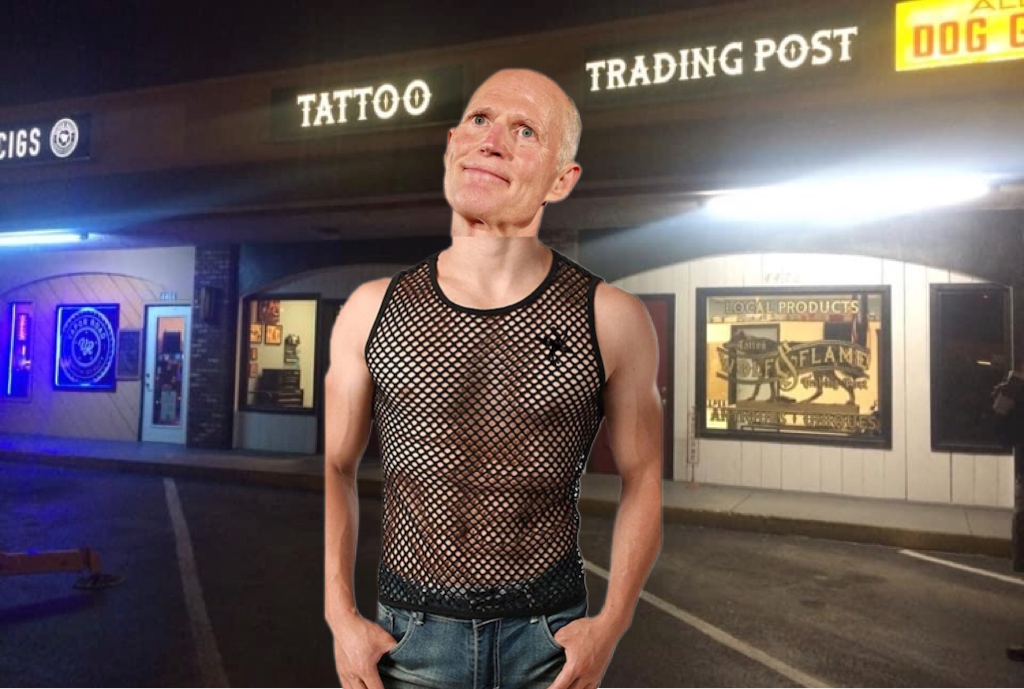 During Senator Scott’s Monday morning public health crisis press conference, reporters noticed that through Scott’s mesh tank top he had what appeared to be a tattoo of a Swastika on his left pectoral muscle.

“Senator, is that a tattoo of a Swastika on your chest?” Asked Marlyn Brady, of Tampa 16 News.

“No, no, it’s an unfinished windmill.” Scott defended himself, while reaching both arms out towards the crowd as if he were pushing them away.

“It looks suspiciously like a Swastika!” Shouted Arnold Greene, of Bay Journal Review.

“I can prove it, my tattoo artist travels with me, he’s here right now.” Then Senator Scott motioned towards a man in the back with brown overalls and a Swedish hat on.

“He’s an expert at windmill art, and I wanted one of his windmills close to my heart, I was going to call it my ‘heartmill’ and maybe get some scripture under it. Light font, probably cursive. Here come up here Hans and show them what you do.”

Scott then pulled his tank top off over his head and threw it to the side and sat down, while Hans then turned on his tattoo needle and continued working on Scotts chest-piece.

After 40 minutes of the journalists watching Senator Scott receive his tattoo treatment, they were convinced that the Swastika was in fact, an unfinished windmill.

Scott then went on with his public health crisis address and reiterated that we are all, “Supremely F***ed” as he mimed the rainbow motion Spongebob does.