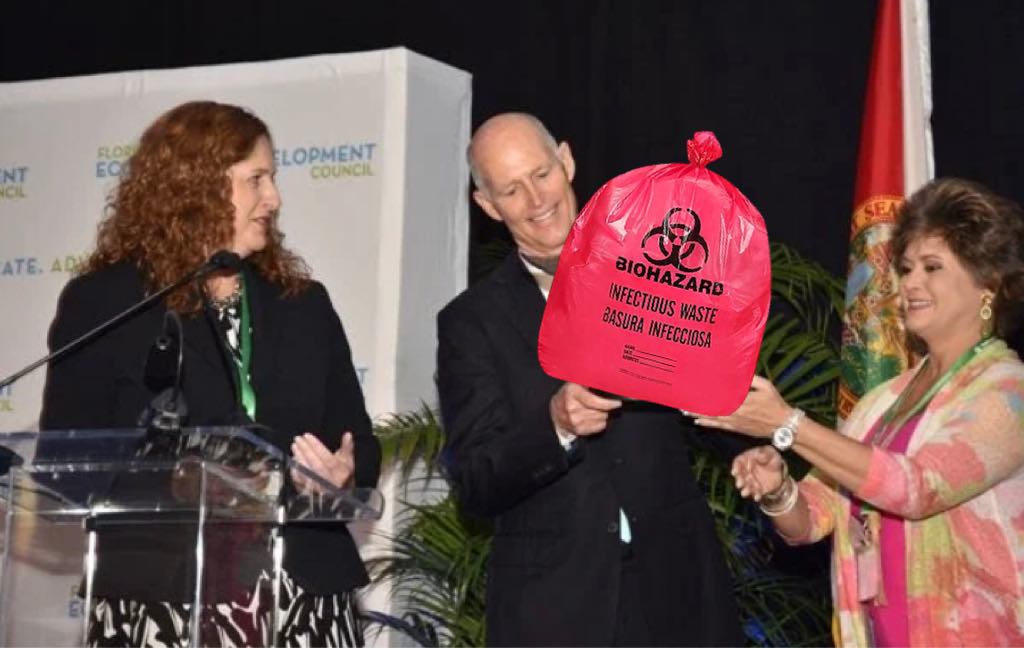 Scott was in Bradenton to present Manatee County officials and representatives of HRK Holdings, owners of the Piney Point phosphate plant with the inaugural “Florida Heroes of Great Innovations in Toxic Waste Displacement” award.

“Just something I whipped up in my shop with some stuff I had lying around”, said Scott, holding a plastic biohazard disposal bag that was leaking green fluid and seemed to be emitting a strange, high-pitched hissing noise.

RICK SCOTT: Mr. Trump! Mr. Trump! Look Mr. Trump! I made this! I made it for you!
DONALD TRUMP: What is that? Is it a dish? It looks like a little dish. Can I eat out of it?
RICK SCOTT: You can, in theory. It will hold food in it. But you probably shouldn’t. I used a toxic lacquer.
DONALD TRUMP: That’s terrific, Ron. Just Terrific.

“And another thing I resent is how you guys are always implying that I’m somehow less-than-likable”, said Scott, continuing the beratement. “Like I have to make grand gestures just to be seen as a regular guy. Well, I am a regular guy, damn it!”

“People say I’m a lizard man and that’s obviously not true. Lizards don’t have ears and as you can plainly see, I have two of them”, he said as one of his ears fell off. “Fuck!”, he exclaimed as he picked it up, put it in his pocket and scurried away, slipping into a storm drain.