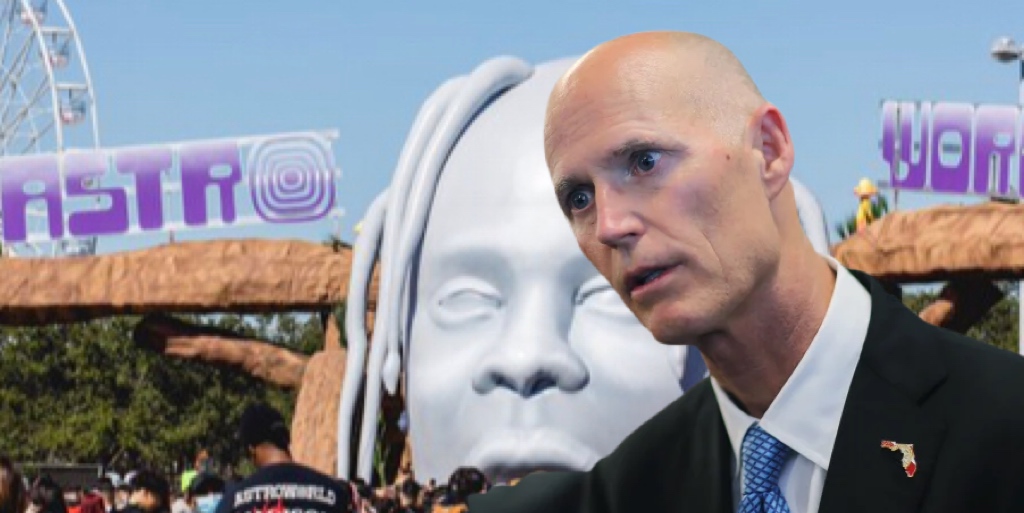 Senator Scott has finally broke his silence on his son’s tragic Afroworld concert which took place in Houston two weeks ago.

“Yes, he’s a rowdy boy,” Scott said shaking his head and looking down.

“But he’s a good boy!” Scott shook his finger highly while raising his tone sternly.

“Sure people died, and people think it’s a human ritual blood sacrifice, while others question, ‘why would he throw away his sponsorships and hurt his cash flow through participating in a human sacrifice’ as if there’s not a single family which holds 51% of the world wealth and could easily overcompensate my son past his wildest imagination.” Scott stated to a confused press pool.

“But the point is, it very well may happen again in the future, and I don’t know why my son is getting singled out.” Scott said, eyes scanning the crowd looking for anyone to contest his statement.

Someone in the crowd stood up and spoke.

“Yea, but, he’s related to a politician so he should be held to a higher standard!”

The entire room burst into laughter for a few minutes.

The man who stood to speak continued to wait for the crowd to die down so Senator Scott could address his question, but once the laughter died, a group of men swiftly and silently entered the room and placed a mesh bag over the mans head and quickly transported him out of the room to an undisclosed location.

“Does anybody else have a question?”

The room wasn’t laughing anymore. Now it was a very serious vibe and everyone awaited the next things to come out of Senator Scott’s mouth.

“Anyways,” Scott said, slamming his hand on the table, causing his water cup to jump and dribble a little bit onto the cuff of his suit.

“Oops, got a little wet there!” Scott joked to the crowd, even though the audience could see, from the tiny spot where Scott’s skin was touched by the water there was a visual smoke burning off of him and he was in severe pain at least for a moment.

“Anyways… There are so many other musicians who perform literally as the devil and wear animal heads and splatter blood all over the stage and make literal animal sacrifices… I mean remember Ozzy bit the bats head off! Death metal is allowed to exist, but my boy went to far! It’s just crazy.” Scott shook his head once again.

Then Senator Scott’s Fit Bit wristband vibrated and he looked down to his wrist and squinted to read the incoming transmission.

“Welp! Looks like I filled my required pandering for the day! I’m out of here!” Scott excitedly announced.

A digital end-of-the-shift vintage work-whistle sound blew, coming from his wristband, representing that Scott was allowed to “clock out,” and he then picked up his jacket and briefcase, then calmly exited the stage, walking out of the nearest double-doors, whistling on of his sons songs.

“Rollin, rollin, rollin got me stargazing.” Scott quietly sang to himself as he walked through the empty halls of the vague government building where the press conference was held.

There were no clocks in the room, or the building, and all electronics were confiscated at the entrance of the building. All of Senator Scott’s quotes I reported were recalled from memory.