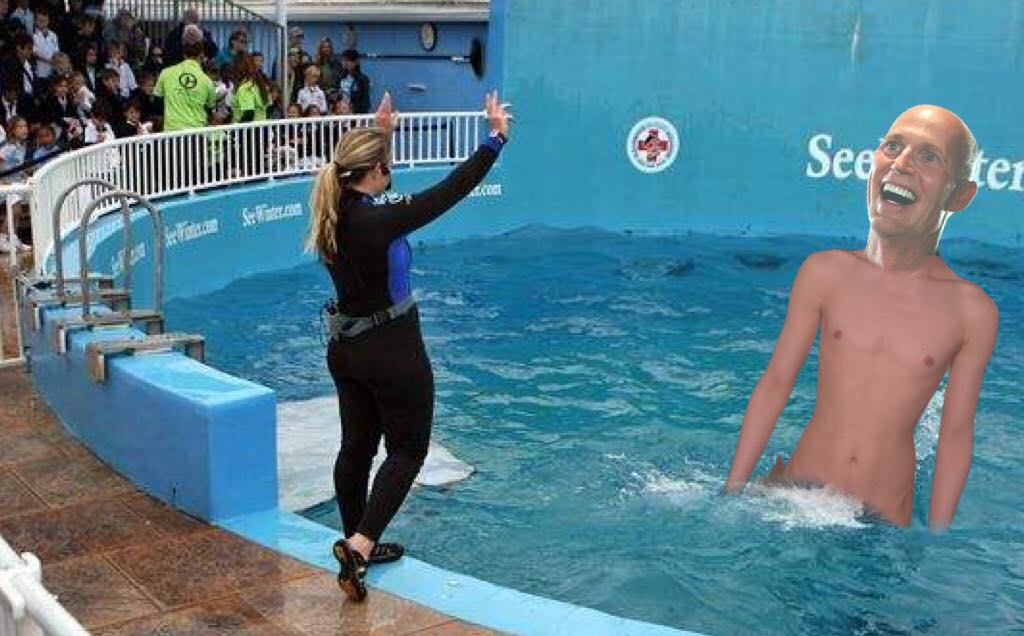 US Senator Rick Scott of Florida will be replacing Winter the Dolphin on a temporary basis at the Clearwater Marine Aquarium.

“Winter was beloved by children everywhere, many of whom are visiting Florida for the holidays,” said Scott. “And since her unfortunate and untimely passing, probably at the hands of Joe Biden… although I have no proof of that yet… I just felt the right thing to do was to attempt to take her place in their hearts by taking her place in the water tank.”

Clearwater Marine Aquarium spokesperson Debbie Lolligo said, “Somehow, Senator Scott is under the impression that we’re holding celebrity auditions for a replacement, like Jeopardy did for Alex Trebek. We’re not, but he’s a Senator, so when he showed up naked and dove into the tank, we felt like we kind of had to let him.”

“I’d like to see Mayim Bialik leap 12 feet into the air through a flaming hoop,” Scott said.

“Okay, we never had Winter leap through flaming hoops. In fact, for that reason among others, I initially told him to get out of the tank. But a Secret Service agent pulled back his jacket to show me his gun while shaking his head no, so I backed off,” she said. “I guess it’s the ‘Rick Scott Dolphin Show Sponsored By Medicade’ now. At least for a while.”

“Yeah, I’m too busy to devote all my time to this so I’m only doing it until Winter comes back. Get well soon, you crazy fish!” said Scott, demonstrating a lack of basic understanding of death and dolphins simultaneously. “Dolphins are the undead monkeys of the sea.”

“They can try to find a better dolphin than me, but they won’t,” said Scott. “Look at me; I’m hairless and I eat raw dead fish like a dolphin but I’m also completely asexual so I’m non-threatening. I’m better than a dolphin. I’m perfect!