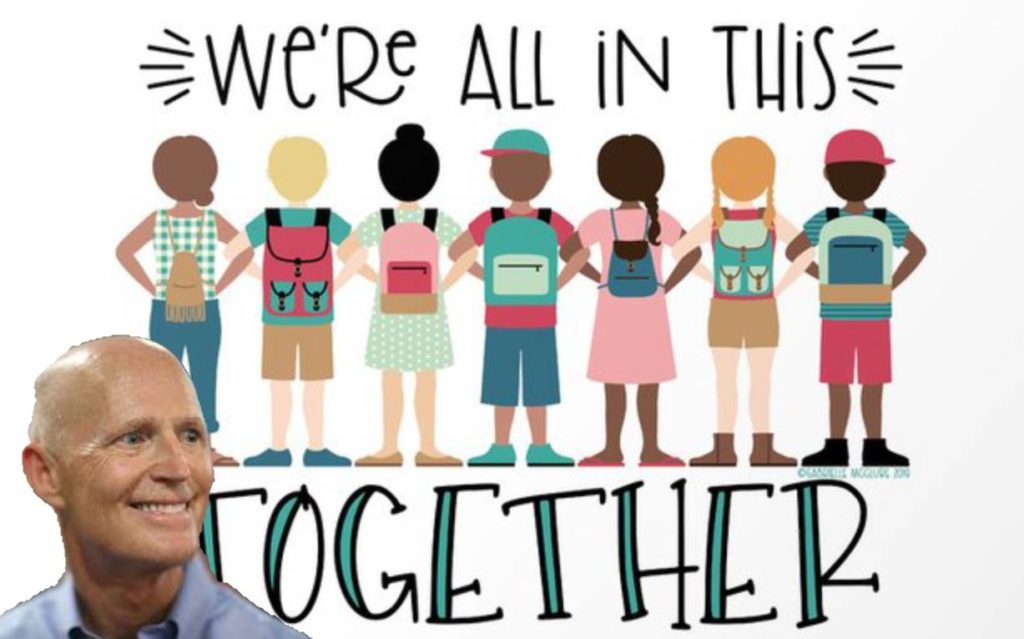 Senator Rick Scott is seeking trademark protection on the phrase “We’re All In This Together”, which has caught on as words of encouragement for people all over the world during the Covid-19 pandemic, a move that is expected to fail because it’s a cynical cash-grab being perpetrated by an evil skin goblin.

“People are saying this a lot”, says Scott. “The phrase, not that I’m an evil skin goblin, whatever that is. The fact that the phrase is popular means there’s money to be made on it. My opponents would say I’m not entitled to cash in because it has nothing to do with me, in that not only did I not write it but that I also don’t believe it because it implies that the poors are included. My counter to that is: So? That never stopped me when it came to stealing from Medicare.”

He went on to say, “This is no big deal and everybody should let me have it simply because I want it. That’s how things are supposed to work. Like when Pat Riley patented ‘Three-Peat’, he gets a little money every time some team wins three championships in a row. It’s like that. Only this would be me getting money every time someone tries to cheer up a depressed friend or a kid makes a poster thanking emergency service personnel. What’s the problem?”

This is not the first time Scott has tried to patent a catchphrase associated with Covid-19. “Yeah, they wouldn’t let me have ‘unprecedented’ either, which is absurd. ‘Unprecedented’. Nobody even knows what that means. Nobody has ever said that word before. It’s like a unique, uncommon word. There should be a word for it.”

I looked at him with disapproval and he said, “Hey, listen. It’s better than standing outside Universal Studios trying to kill children with scars on their face, all right?” I replied, “wow, really leaning into the Voldemort references huh?” And he said, “who’s that?”

Scott signaled the interview was over by turning into an oily green liquid substance and seeping into a storm drain, leaving behind a sulfuric residue.