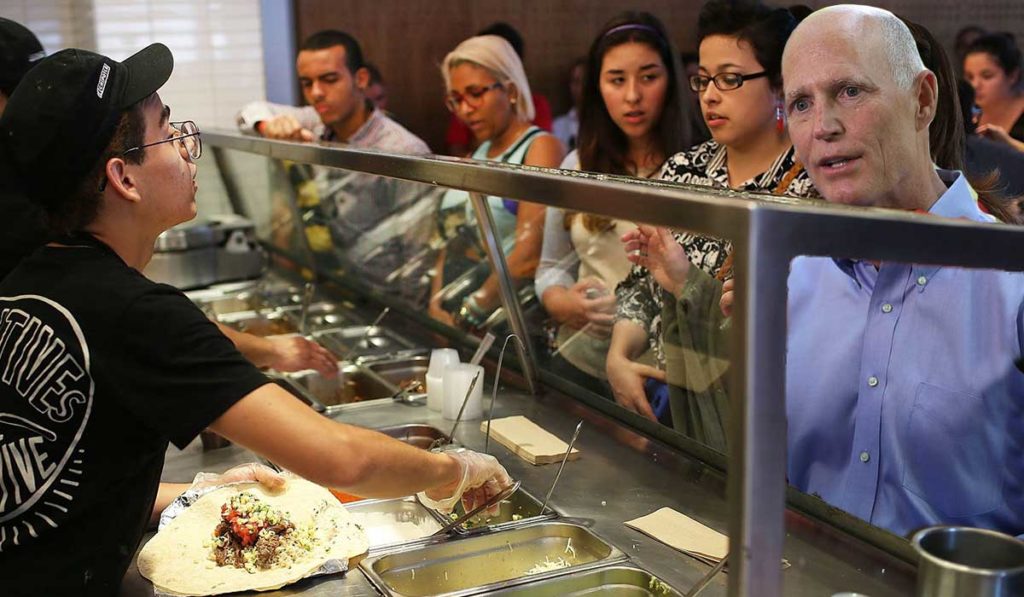 In an effort to connect with young hispanic voters, Senator Rick Scott showed off his Spanish speaking ability at the University of South Florida-area Chipotle during his, “Let’s Work But Not Be Paid Enough to Live” voter engagement tour.

Dozens of supporters crowded the popular Chipotle location to catch a glimpse of Senator Scott, who has been known to only make appearances in nightmares.

“When I spent $64 million of my own dollars to get elected to the Senate,” Scott said to the crowd, “And before I continue, those were my dollars that I earned through my business where I scammed Medicare and Medicaid. It’s not fraud money if you spend it to change the laws in your favor.”

Senator Scott was then distracted by his burrito, he took a bite and spit it out before angrily walking up to the counter.

“I said I want a carnitas burrito,” Scott said while talking down to the cashier. “CAR-NI-TAS.” He then threw the burrito in the cashiers face. “Make it again!”

“Yo no se señor,” said the cashier in a confused manner.

Senator Scott laughed to himself, “I speak Spanish and I know what you said.” The senator then signaled to his security detail who then stormed in to the restaurant and began opening fire on everyone.

“This is America, and in America we speak ENGLISH.” Senator Scott said while unwrapping a pack of 305 non-filtered cigarettes, pulling one out to light up. “We speak english, until I have to order my burrito.”

Scott then smoked his cigarette down to the butt in one puff, exhaled the smoke all over the restaurant, turned into a bat and then disappeared.