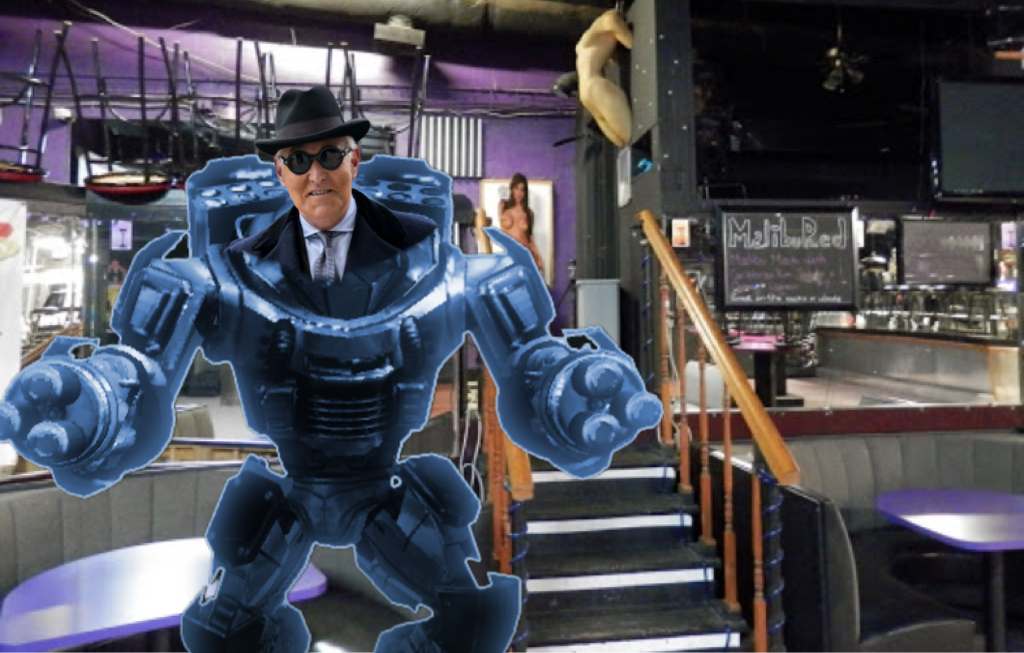 Roger Stone’s prison commute has swingers clubs around Tampa rejoicing as one of their most distinguished guests has avoided criminal punishment.

“We can’t wait to have him back!” Said Joe Slurpo, head of customer service at Slurpo’s Lounge in Brandon.

“Him and his partner are very loving, fun, people, and it’s just a great time being able to share our love together, and there’s really nothing weird or bad I can say about them!” Slurpo firmly, but egregiously, stated.

As I started walking out, part of a curtain fell down revealing a giant mech suit and I said, “Whoa, what’s with this thing?”

Then Slurpo yelled, “Oh no, he found the big mech suit!”

Then Roger Stone, who had previously been hiding behind a separate curtain across the showroom, deftly ran and hopped into the mech suit, initiated it’s start-up, and the giant Roger Stone-piloted mech suit began running around the room, causing havoc.

I wasn’t really concerned with what was taking place in Slurpo’s lounge so I left and walked out the front door.

“Ah, isn’t it nice to blur the lines between satire and reality?” I thought to myself.

Because this is so ridiculous you’d think, “there’s no way this is real,” but believe it or not, people will still read a satire article and go, “Oh, this is real, for sure, I know it.” Or they’ll go, “They did this for malicious purposes, they’re trying to cause fights,” and we’re not.

As part of the TNF mission statement we all signed when we started working here, which is also embossed on the front of our bronze statue of OJ Simpson which was acquired while OJ was the CEO of TNF, (which he still may be, I haven’t knocked on the door labeled “CEO” in a while) it states, “all those who sign this pledge WILL NOT (in all caps) EVER, tarnish the name of satire journalism and will NEVER become ‘fake news.’”

As we all know Roger Stone owns a giant mech suit. It’s been documented very well over the years by hundreds of publications and photographers. There’s video proof on the internet of Roger Stone operating a giant mech suit during a party in 1981. He even says, “My name is Roger Stone and I like piloting mech bots!” And nobody corrected him and told him nobody calls them “mech bots” because it doesn’t even matter. Just like my favorite chorus from my favorite song, when it comes to the conclusion of this fake news article, “In the end, it doesn’t even matter.”

Thank you for supporting a grassroots organization with deep-seeded roots in the community. By reading this article and keeping your browser open for this long you have non-verbally agreed for us to instal malware on your computer. You can’t get it off. And if you don’t donate $100 to TNF right now I will send nude photos of you to your entire contact list. Do it now! I’ve started a 2 minute clock! Go!*

*We did not install malware on your computer. It was a joke. You don’t always have to get jokes.