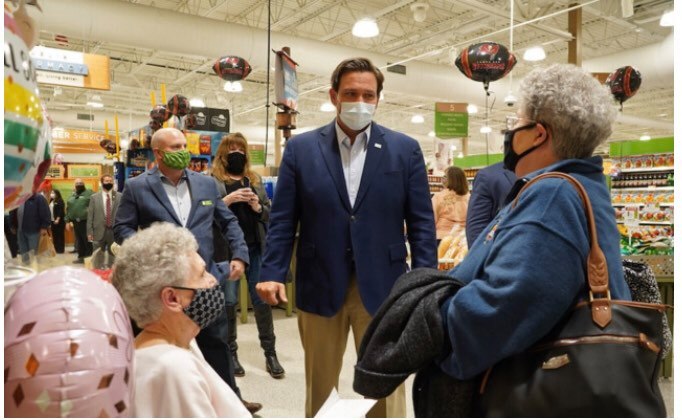 Florida governor, Ron DeSantis, who is up for reelection in 2022, is actively searching for someone to take care of him after his first term is over. Since taking office in 2019, DeSantis has been heavily criticized for his indifference to Florida’s dysfunctional unemployment system and his response to the COVID-19 pandemic. Sources close to DeSantis, like his grandparents, say, “He does not foresee himself getting reelected.”

In January, Ron DeSantis began frequenting checkout lines and ice cream aisles of Publix grocery stores to schmooze the states’ feeblest citizens. His strategy remains, “Go to Publixes in the richest neighborhoods and find the near-dead to finance his lifestyle after his term’s up,” reports his wife, Casey. She supports the endeavor, as she “is over the nine to five grind” and doesn’t “want to give up house calls from strippers who look like Rick Scott.”

This past weekend, DeSantis made rounds in Tampa Bay with his family. They visited Downtown Tampa and St. Pete, Channelside, Davis Islands, and Wesley Chapel. Before going into the first store, Ron drew out a game plan for his clan. We found the crayon-ridden Starbucks napkin he used shoved behind a box of Hamburger Helper.

His three children waited by the exits and “hit ‘em with the sad eyes,” as the napkin instructed. His wife paced between the strawberry Blue Bell and meatloaf Lean Cuisines; her job was to “look helpless like women are supposed to.” Ron, the self-proclaimed “Handsomest Sugar Baby Governor Boy,” elbowed bag boys for the chance to flirt with “anyone saggy.”

One bag boy, Timmy Sack of the Bayshore Publix, suffered a black eye and injuries to his groin. He said, “He ruptured my balls. I’m lawyering up with Jack Bernstein.”

Sack also told us, “He was asking old women if he could ‘sit on their laps while they drove home’ and ‘replace their husbands.’ There was a lot of close talking and uncomfortably long eye contact. I didn’t see him blink once. He’s even grosser than you think.”

Unfortunately, DeSantis was unable to lock down anything concrete while in town. We suspect he will have better luck in Palm Beach.

UPDATE: Mitch McConnell has begun to follow suit at Kroger stores in Kentucky.