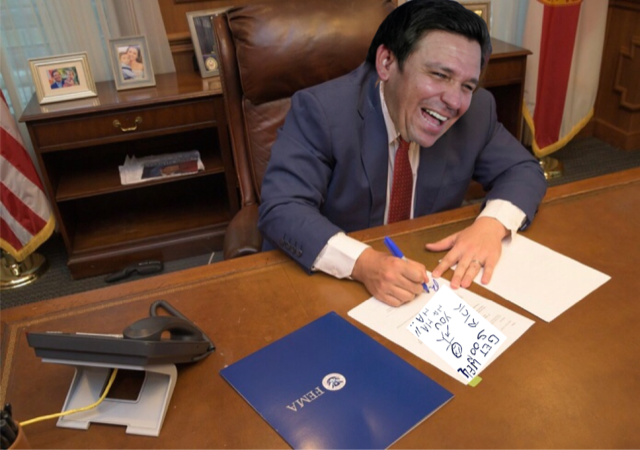 Following the announcement that Senator Rick Scott has tested positive for having Covid-19, Florida Governor has sent his predecessor a hand-written get well card.

“It’s no secret that Rick and I have had our differences,” said DeSantis. “But President Trump is always reminding me that he’s a colleague and a good fellow Republican, so I guess I don’t want him to die.”

DeSantis proudly displayed the card that he designed himself: “I could have had one of the gals here in the office run down to Walgreens and buy a Hallmark card, but I wanted it to be more personal”, said DeSantis. “I wanted him to know that it came directly from me.”

He said the caricature of Scott illustrating the card wasn’t his first idea. “I wanted to draw Snoopy but one of the gals here in the office {Ashley Moody, Florida’s Attorney General – ed.} said there might be copyright concerns”, he said. “Plus, it’s hard to draw Snoopy. I’ve been trying for years but I just can’t ever seem to get his ears right.”

Scott says he’s experiencing mild symptoms and is quarantining in isolation at his home in Naples. It’s believed that he contracted the virus at a campaign event he attended last week in Georgia with Republican Senators David Perdue and Kelly Loeffler who are both facing January runoff races for reelection there.

“Well, that’s what he gets for going to Georgia,” said DeSantis. “If he had come to Florida to campaign for those representatives in Georgia, he’d be fine because we have a handle on things here. But I do hope Rick makes a full recovery, even though he’s a big dumb dope who’s mean to me for no reason. Maybe if he loses his senses of taste and smell he won’t be tempted to go to all those fancy campaign dinners that I’m never invited to.”