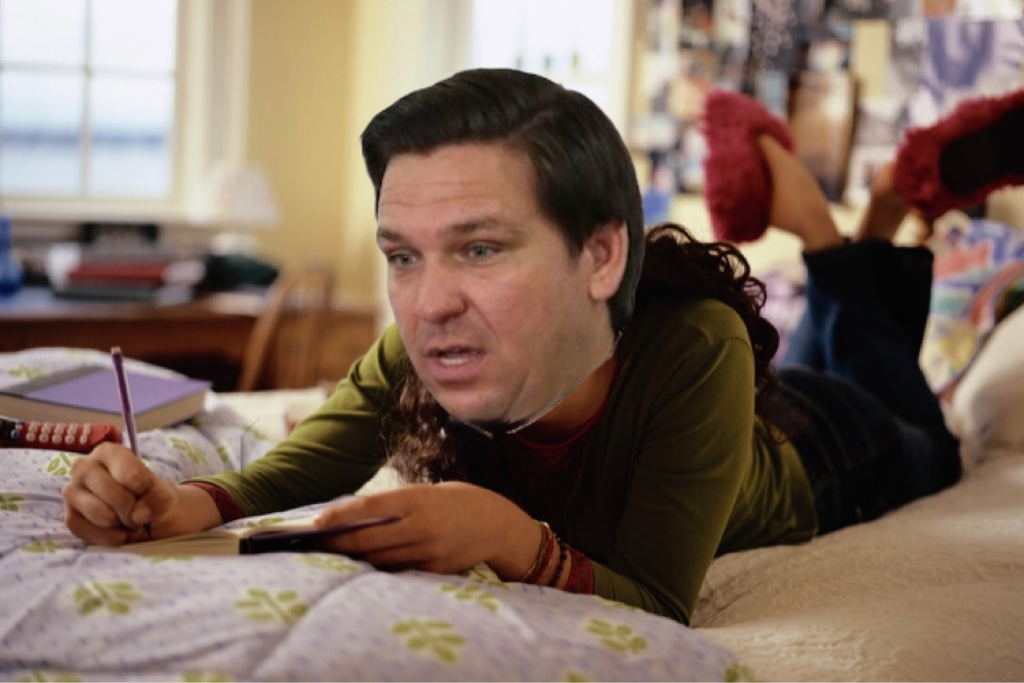 A slam book is a notebook (commonly the spiral-bound type) which is passed among a group of friends. The keeper of the book poses questions (which may be on any subject) and the book is then passed around for each contributor to fill in their own answers to the questions. In this particular case, every question was about Scott and variations on how and why he “sucks”.

Unlike most slam books, almost all of the replies are from DeSantis himself. Tampa News Force was able to determine that DeSantis is the original author because “THIS IS SWEET RONNY D’S SLAM BOOK” is inscribed inside the front cover in purple ink with hearts dotting the i’s along with “RD + DT 4EVAH”, plus a hand-drawn state seal of Florida and the initials “VH” in the style of the Van Halen logo.

More than half of the entries simply read “I HATE HATE HATE HATE RICK SCOTT” with variations of how many times the word ‘hate’ is used, from as few as one to as many as 18.

At several points, DeSantis offers scathing, detailed character assessments of Scott. “He thinks he’s so cool, just because he stole $300 million from Medicare. Big deal. I could steal more than that if I wanted to and I ran a hospital company positioned to commit massive fraud. Did HE ever make it look like the state of Florida was effectively handling a pandemic better than most states in the nation for almost three weeks? I DON’T THINK SO!!!”

Later, he offers the opinion that, “Rick Scott should wear a mask ALL THE TIME cuz he is UGLYYYYY!!!”, accompanied by a sketch of the senator with a butt for a face.

There are also plaintive questions such as, “WHY IS HE SO MEEEEEEEAN?” and “HOW CAN HE SAY HE LOVES PRESIDENT TRUMP MORE THAN ME???”

To that second question, Democratic Florida state senator Janet Cruz, representing the 18th District, which includes parts of Tampa and Hillsborough County, replied, “I think YOU are secretly in love with Rick Scott! He’s all you ever talk about! Get a grip!”