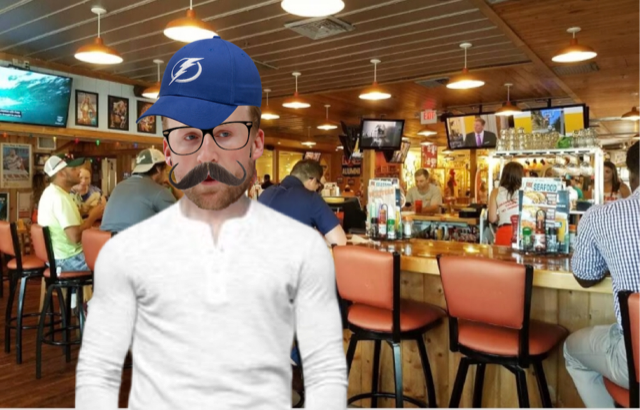 A man watching the Tampa Bay Lightning game against the New York Islanders in the NHL Eastern Conference Final at the Clearwater Hooters was falsely identified as Lightning captain Steven Stamkos last night.

The man entered the restaurant shortly after the puck dropped to start the game, just after 8pm, and took a seat at a remote booth by himself. Wearing a Lightning cap and glasses, he reacted subtly to the Lightning taking an early lead on Brayden Point’s goal to open the scoring at 1:14 of the first period. He then let out a slightly audible groan when the Islanders tied the game just under three minutes later. These reactions were largely ignored by other patrons and the waitstaff.

The Lightning built a 3-1 lead to end the period and quickly extended that to 5-1 on Point’s second goal, causing the man to fidget in his seat and mutter to himself.

When Nikita Kucherov scored in the third period to make the score 6-1, the man uttered an expletive and banged his fist on his table, causing people to turn to look at him. One customer said, “Hey, that’s Steven Stamkos!” and other customers chimed in, agreeing that the Lightning captain was among them, watching the Lightning go on to what would eventually be an 8-2 rout to take a 1-0 lead in the opener of the best-of-seven series, their ninth win of the playoffs, in which Stamkos has not played a single game.

The man responded to the sudden, unwanted attention by saying, “No, no, no, I’m not Steven Stamkos! My name is Sven Tekmoasts. I’m from, ummm… S… Sa… something…” A helpful woman offered, “Safety Harbor?” and he said “Yeah. There.” This explanation seemed to satisfy most of the crowd, who apologized for bothering him. One man remained unconvinced and said, “I thought you were supposed to be in The Bubble, up in Edmonton.” Mr. Tekmoasts said, “I am” and left hastily. The man replied, “Oh”, turned to his friend at the bar and said, “Well, that was awkward.”