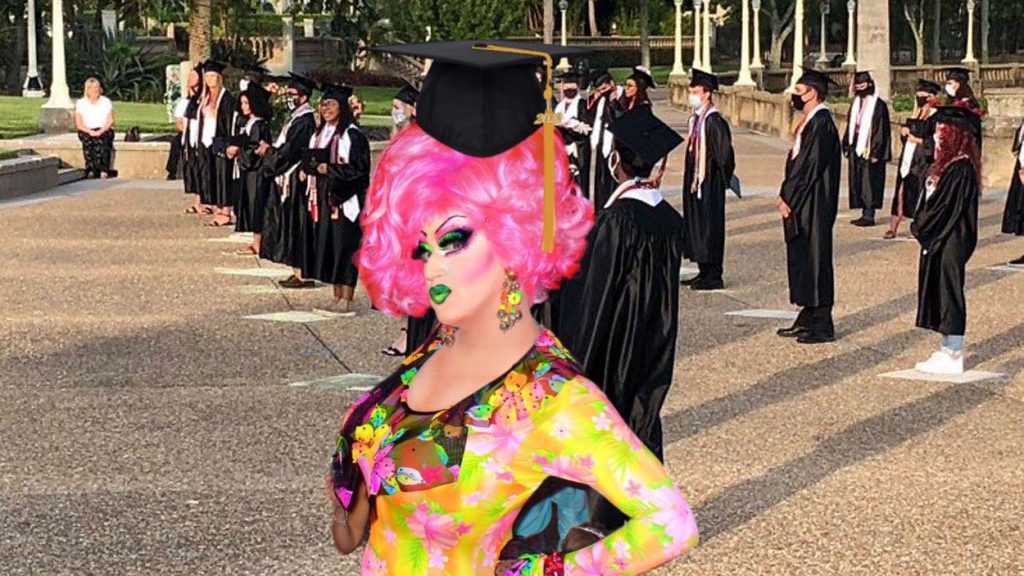 Hillsborough county public schools will now require all students participate in at least 40 hours of drag competitions in order to graduate, according to the Hillsborough County School Board.

“To combat bigotry and prejudice, the only way we can effectively break children’s bad habits is to force them to immerse themselves in the diverse culture of drag shows.” Said President of the School Board, Dr. Meldon Balming.

“Students must learn to put on their own drag make up and design their outfits.” Continued Balming.

“Choreographing dance routines, mixing their own music, hell we’re even going to push for extra credit to those students willing to indulge in same-sex romantic experiments.” Smiled Balming.

“Growth is about going outside of your comfort zone and partaking in another’s culture. Understanding history and struggle of other groups. This is the most effective way to execute this concept.” Balming finished proudly.

As we were conducting the interview, a student suddenly entered Balming’s office in 10-inch-heels and a black Disney Maleficent costume, complete with smokey eye-shadow.

“Mr. Balming, does this look ok for my performance later?” Asked a thin, orange-haired, freshman with coke-bottle eye-glasses, and pocked freckles.

The student turned and exited the room, revealing he had a long cat-of-9-tails tail flowing from his tail-bone.

“You don’t want to know how that tail stays in.” Balming winked and laughed at me, as I bared a forced grin through a cringey smile.

“Has the response from the students to the new initiative been mostly positive?” I asked.

“Kids are much too scared to question forced drag show participation out of fear of getting cancelled!” Balming shook his head and laughed, wiping a tear from his eye.

“How about the parents?” I asked.

“Oh, the parents are trying to kill me.” Balming got serious.

“Very upset. And I can understand why, they’re from a different era with different ideals and rules, they just don’t want to accept the progressive future we’re heading towards, and that’s alright, not everyone will immediately be on board.”

Balming then opened the blinds back up.

Then a gerbil fell from Balming’s pant leg.

“Oh sorry, that’s Demonia, I keep her tucked up my anus, it feels good. I like it.” Balming said sternly.

“Isn’t that animal abuse?” I asked delicately, trying not to upset this clear unhinged psychopath who had somehow managed to become the president of the school board.

“Yea… You could say that.” Balming said, distracted, flipping through a Spirit Halloween catalogue he had picked up off his desk.

“Are you worried you’re going to get arrested for this kind of behavior and forcing kids to be in drag competitions?” I asked, feeling myself lose confidence in my safety, knowing that I’m prying too much, and reminding Balming of the dark reality.

“But you need to be willing to die on the right side of history.” Balming said, raising his fist strongly to the air.

“God no.” Balming cracked up.

“Private school kids are allowed to do whatever they want. They pay to have the education they want. Not public school. We decide! And ‘we’ decided that kids need to be in drag competitions, because it’s good. That’s as simple as I can put it.” Balming said, crossing his arms in satisfaction.

“Alright, well I guess that’s that.” I said, gathering up my things and heading out from Balming’s office.

“Hey before you go…” Balming said.

He then suddenly chased me around his office trying to pounce on me as I shrieked in terror.

“Ahh! Ahh!” I screamed as I ran around his cluttered office, knocking things down, shattering his ironic Enron coffee mug.

I was able to get out of the office without being grabbed by Balming, and as I got to the parking lot I looked up at the building to see Balming creepily waving at me from his office and mouthing “I’ll get you next time” to me.

Why Balming has not been arrested is beyond my comprehension, but hopefully that sick monster is held accountable for his actions soon enough.

Until then,  students will be required to complete the 40 hours of drag competitions.