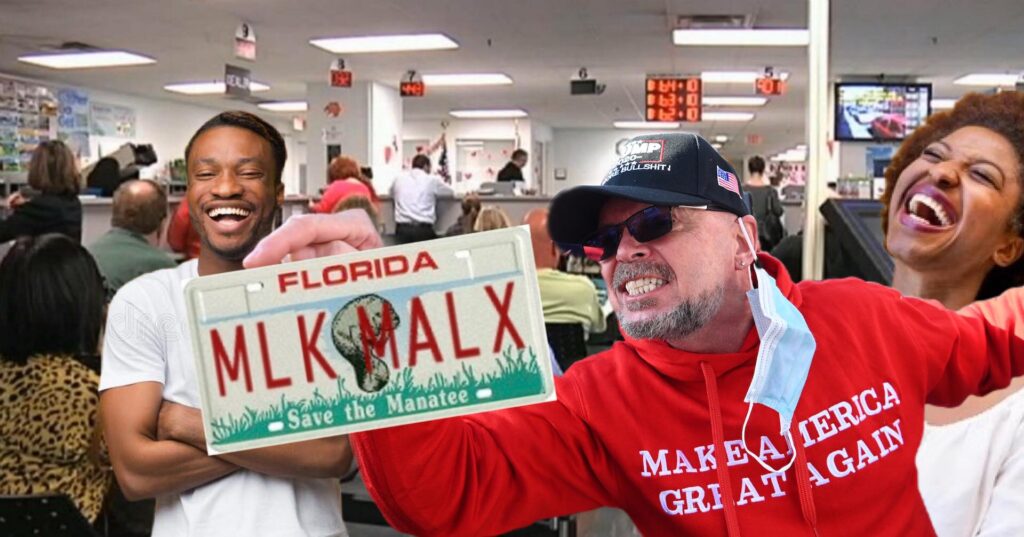 “This license plate is completely unacceptable,” he fumed at the clerk, a Ms. Deondra Jackson of Brandon, waving the plate that reads MLK MAL X around wildly. “I can’t put this on my Ford F-250 XLT with the Salt Life sticker across the back window!”

“Oh? And why not?” asked Ms. Jackson sweetly.

Mr. Keenutz leaned in and whispered, “My friends and associates won’t like it! They might get angry and damage my vehicle!”

“Yeah, yeah, something like that. Just give me another one,” he hissed.

“I’m so sorry, sir. We can’t do that,” she answered. “The license plates are printed randomly and distributed in order. It’s just the luck of the draw. This one is going to be yours. Forever.”

“What if this one gets, like, lost or damaged? You know, accidentally,” he asked.

“Then a new one will be manufactured for you,” she said. “But with the same letters.”

A young man name Karim Hicks who was waiting for his number to be called saw the plate and said, “Hey, I wouldn’t mind having that one.” Then he saw Mr. Keenutz’s obvious aggravation and what he was wearing and said, “But that’s all right. He can have it.”

At that point, Ms. Jackson said, “Okay, look. I could get in big trouble for this but you’re obviously upset. Don’t tell anyone I’m doing this, but I found another plate and you can have this one instead…”

He stared at her blankly for a few seconds, muttered something under his breath, took the original plate he’d been issued and stormed out.

“Happy Black History Month!” she called out to him as he left.