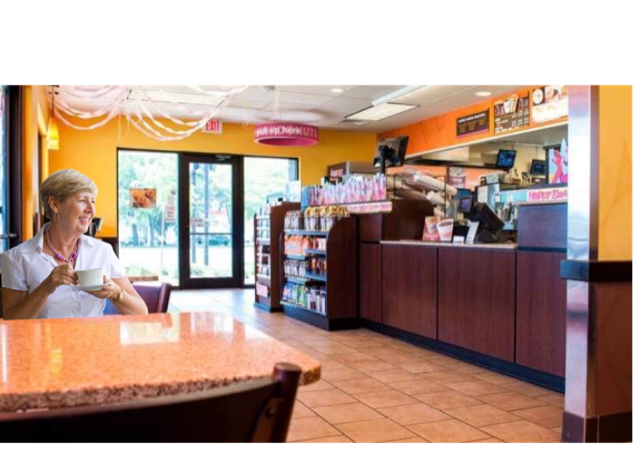 Cheryl Winkley is a regular customer at the Dunkin Donuts on Ulmerton Road in Largo, in spite of the banter between ‘Dunkin Radio’ personalities, Ed McMann and Lady D.

“It’s so sexually charged that it makes it hard for me to relax”, she said.

Dunkin Radio is the program produced by Dunkin Brands, the multinational corporation that owns the donut and coffee shops, for the sake of providing background music, news and advertising.

The two hosts, whose pre-recorded chatter is on at all times every day, clearly reading from pre-written scripts without them even being together in the same space at the time the exchanges were recorded, share a chemistry that Winkley says is too erotically tinged for public broadcast in a donut shop.

She cites several examples of what she describes as “over the line” interactions between the two canned voices.

“You should probably get a friend a latte” – Ed McMann
“That’s a hint, I can tell” – Lady D

“This kind of nuanced flirting is actually innocent and kind of charming. But things turn dark in a hurry”, said Winkley

“Come on, you know you want to buy me a peppermint mocha latte” – Ed McMann
“Don’t I always?” – Lady D

“He’s attempting to come off as coy with this suggestion, but it’s obvious she’s going to submit to his dark urges as she always does and he knows it. It doesn’t sound like she has a choice”, said Winkley

“He’s insatiable and she’s resigned to her fate of having to serve as his plaything! And yet, he feels it’s necessary to constantly remind her of her ‘place'”, said Winkley

“Sure, he said ‘please’ but it’s obvious he’s being sarcastic in order to make her feel shame. Of course she’ll make it hot, if she knows what’s good for her. He’s a pig”, said Winkley

“I think we all know ‘Chai Oatmilk Latte’ is a euphemism, for what I can only imagine. Vividly”, said Winkley. “At least he paid her a compliment and it’s somewhat refreshing to see her express confidence in her sexual prowess. Still, their relationship is dangerously toxic. It’s degrading, vile and disgusting.”

When asked why she doesn’t just patronize the Starbucks which is less than two miles west if she dislikes it so much, she replied, “Oh, I never said I don’t like it.”