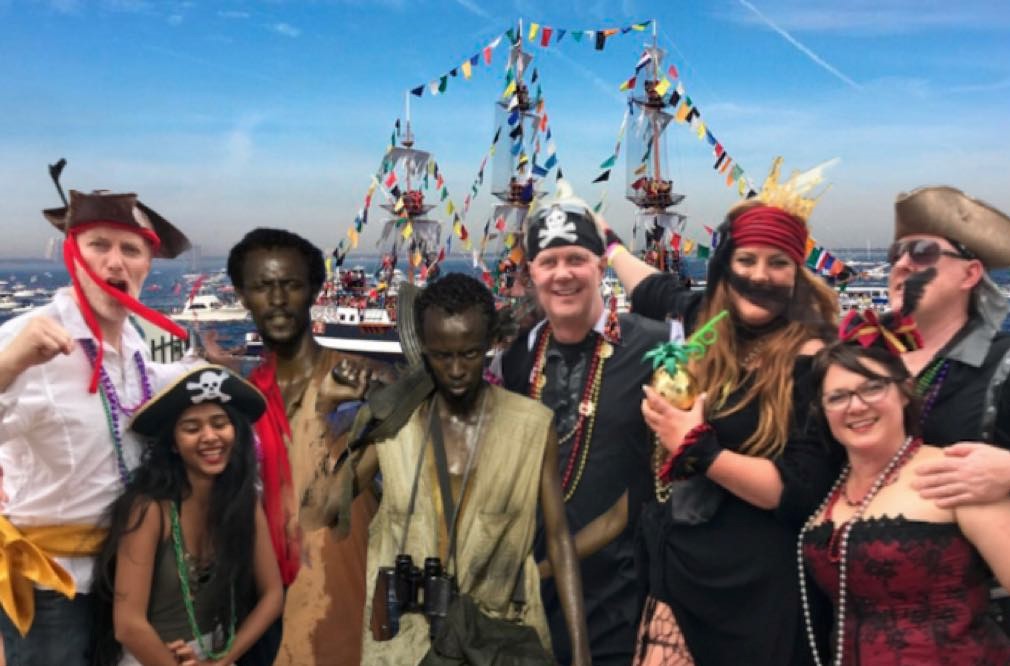 Following last week’s announcement that 2021 Gasparilla activities are being postponed due to COVID-19, one group of pirates is taking the news especially hard: actual pirates from Somalia and the south Tampa residents who befriended them when they attended last year’s event.

“It was so much fun hanging out with those guys”, said Kelly Sievers. “I know they had made plans to come back this year, but who knows if they’ll be able to make the new dates.”

Diric Warsame and Geedi Maxamed were looking for small cargo ships to board and plunder in the Gulf of Aden and somehow got lost and ended up drifting into Hillsborough Bay. They noticed the parade activity taking place along Bayshore Boulevard and decided to come ashore to see if there was anything they could steal. That’s where they encountered Sievers and her five friends.

“Yeah man, D and G! The D and G Boyz!”, said Chad Brupwirth. “I love those guys!” Warsame and Maxamed assessed the inebriated state of the group and immediately hatched a plan to recoup the losses they’d incurred up to that point on their thus-far disastrous mission by killing the men, raping the women, taking them prisoner and then selling them after raping them some more. “D and G said that shit aloud, right in front of us! Hilarious! I love them; they don’t give a fuck!” Sievers added, “I know we really get into the pirate thing but those guys take it to the next level.”

However, after doing several rounds of shots with their new hosts and future victims in order to get them even more drunk, Warsame and Maxamed realized how much fun they were having and decided to abandon their scheme. “G kept pulling up his shirt and flashing people. He wound up with soooooo many beads. D said they knew people who might be willing to pay quite a bit of money for them”, said Sievers. “You could tell they were both having the times of their lives.”

After that weekend, all involved parted as friends, shared contact info and made tentative plans to meet up again at the 2021 event.

Unfortunately, last Tuesday event organizers pushed the main event date back from January 30 to April 17 and issued this statement:

“Out of an abundance of caution and after consulting with healthcare providers, Ye Mystic Krewe of Gasparilla (YMKG) and EventFest have announced that they will postpone Tampa’s signature Gasparilla Parades to a later date this spring. The decision resulted from an ongoing dialogue between event organizers, city leaders, and healthcare experts”

“What a shame since this is an OUTSIDE event. Unbelievable how gullible people are over a flu bug with a 98.5% survival rate. Lol.. SMH”, said a deeply disappointed Warsame.

Maxamed, equally frustrated, added, “Hmm, isn’t that ironic being pushed back to April? That’s the exact month Dr. Fauci just came out and said the Covid will have ‘flattened the curve’ in and that the economy will start bouncing back. Hmm, what a coincidence.”

(Editor’s note: the two quotes mistakenly attributed to the Somali pirates at the end of this article were actually comments made by two Tampa Bay residents on a Facebook post regarding the postponement. Tampa News Force regrets this unfortunate error and humbly apologizes to filthy arms-dealing kidnappers everywhere for any implication that they conduct themselves without due regard for the safety of others.)

← Buccaneers could be on the verge of a very mediocre seasonGronk named new host of ‘JEOPARDY!’ →