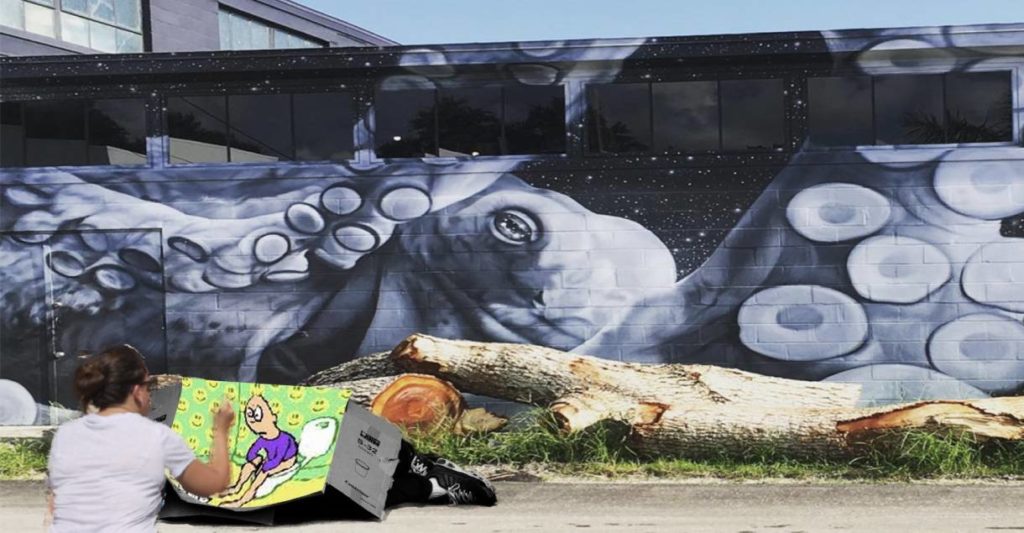 Due to a lack of wall space in St. Petersburg, local muralists have turned to sand art and painting the bodies and possessions of the homeless.

Every square inch of available space to paint has been taken up by professional muralists and wannabe artists alike. With the influx of out-of-town artists from the annual SHINE Mural Festival, the cityscape has been slowly gentrified with actual art covering every formerly bare inch of the city.

Nick Kekllas, 40, has made a living painting walls in St. Pete, but has recently had to become more resourceful. “Yeah, there’s this guy Ricky who’s passed out drunk outside of Taphouse 61 everyday,” Kekllas said. “There was nowhere else to paint, so I paid him $20 to use his nude body as a canvas. The public needed more murals and Ricky was ready to be a public servant.” Ricky was not awake for comment.

St. Petersburg Police have mixed feelings about the use of the homeless population. “Ricky can’t be out here naked,” Sgt. Steve Smith said. “But I mean, his bits are covered now. We’ve also seen a decline in vandalism to businesses and homes. We’re kind of just staying out of it.”

After inciting controversy by shutting down the Williams Park bus hub in 2016 in an effort to drive the homeless population from downtown, the city is now inviting them back as a cheap alternative to beautifying the streets. Mayor Rick Kriseman said the city plans to capitalize on this new art form with a festival embracing the now “three-dimensional mural experience.”

Local graffiti artists meanwhile are feeling the lack of wall space where it hurts most – their ego. St. Petersburg’s “triple butt” graffiti artist can’t find a single empty bathroom stall to tag. “He’s going crazy, man,” a source close to the unnamed artist said. “He feels very constrained in his art. He started baking cookies and decorating them with butts. He doesn’t know what else to do.”

St. Petersburg muralist Derek Donnelly, 35, known for his sea-themed artwork, has started sculpting. “I started making these really cool sand castles outside of the hotels. It’s actually a really beautiful process,” Donnelly said. “If I hate a piece of work, I don’t have to look at it for years. The next hurricane or pissed off 7-year-old is sure to wipe it all out.”

The popularity of painting on the homeless and their belongings has also brought with it a rise in vandals tagging school children and stray animals, creating yet another divide between feuding muralists and graffiti artists. “This is why we can’t have nice things, man,” Kekllas said.

Homeless advocates are protesting the movement. “We don’t want to subject anyone to this shitty art, especially when in rehabilitation, a representative at Pinellas Safe Harbor said.

View all posts by Shannon Kelly →