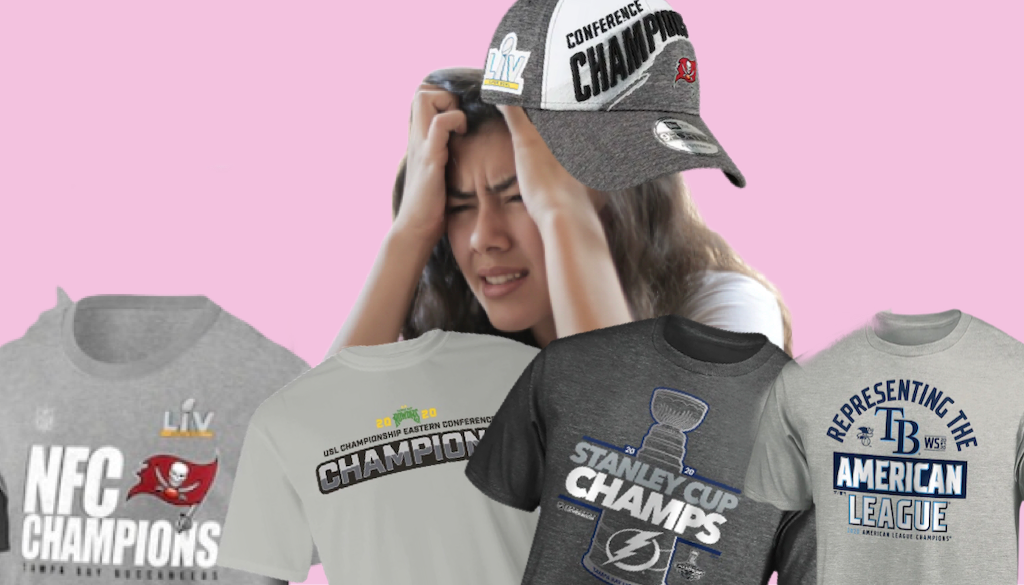 “I’m strictly a die-hard Tampa Bay fan. I only care about my teams”, she said. “But every time you turn around lately, they’re all winning. I can’t afford this!”

She said, “I’ve had one or two shirts and hats that I wear to games or to sports bars and that’s been fine. I’ve gone gone years without buying any celebratory merch. That’s not the case anymore! Not lately, at least.”

“At first, you know, somebody wins and you think, ‘well, I need a keepsake to remember the occasion plus something to wear to a watch party or a parade or something. No harm in getting one t-shirt’. Just when it’s something truly noteworthy and then, just one t-shirt! Not all the flags and coffee mugs and other crap. One single, sensible garment,” she said. “For me, this year, it was an AL East Championship shirt for the Rays. That was followed by having to get a World Series shirt. Then it was playoffs and an Eastern Conference Championship and the Stanley Cup for the Lightning. Then there’s the Rowdies making it to their league championship. I didn’t buy a Brady Bucs jersey but they made the playoffs too, and are now headed to the damn Super Bowl. I have eight t-shirts and, like, six hats that I didn’t own six months ago. And each of those cost about $30, so what’s that…?”, she said, doing the math in her head. “Holy shit, I’ve spent over $500 on this crap! I certainly didn’t budget for that! Based on history, how could I? Why would I??”

She’s appreciative of all the local teams recent success but also thankful they haven’t celebrated even more accomplishments.

“This is ridiculous. Thank God the Bucs and Lightning got in as wildcards and the Rays lost the World Series”, she said. “Otherwise I’d be out almost a mortgage payment!”