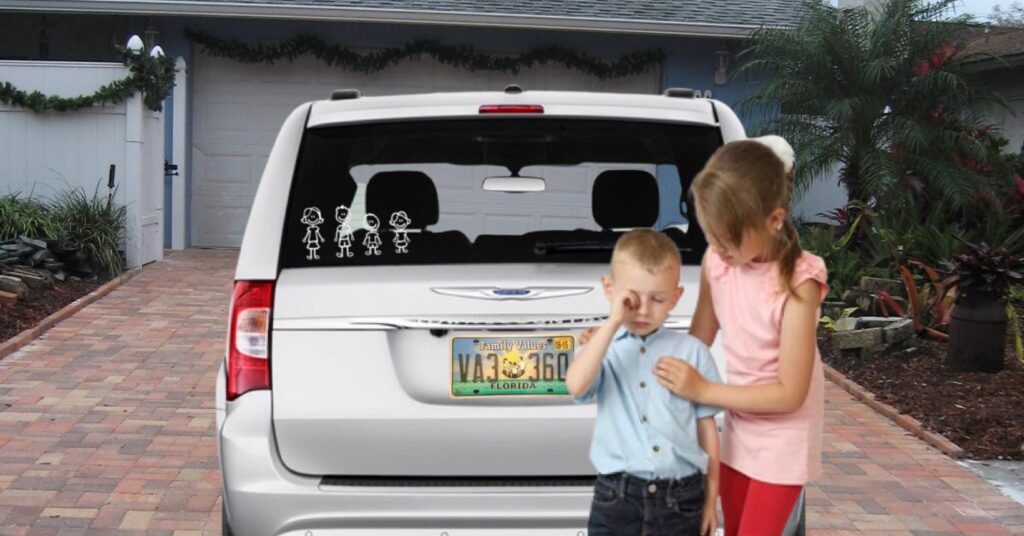 The man in the stick figure family depicted on the rear window of a Temple Terrace woman’s minivan is the only identification the woman’s children have with their estranged father or any positive adult male role models.

“Yeah, Kenny left me in April and I keep forgetting to go out with a razor blade and scrape that off,” said Sue Ann Quarrely. “That’s okay, the kids seem to like looking at it. It’s a nice way to remember him. I mean, he isn’t dead but I wish he was.”

The children in question, her son Jayden and his sister Katy were standing in the driveway, staring at the minivan and crying at the time.

“D-daddy?” sobbed Jayden while wiping away a tour and pointing at the decal. “Shhh”, replied Katy, offering him a hug.

“Okay, so he’s not around to provide love and guidance but he’s also not around to get drunk and scream at them,” Sue Ann pointed out. “Win some, lose some I guess.”

“And it’s not like they’re missing out on much. I’m dating this guy Brad and he’s around quite a bit. They can call him ‘Daddy’ if they want,” she said.

“Man, fuck that noise!” replied Brad in response. “If I ever catch either one of those brats calling me ‘Daddy’, I’ll be out of there so fast their heads will spin, and that includes Sue Ann.”

“Well, technically that’s not true. I didn’t say all that,” countered Brad.