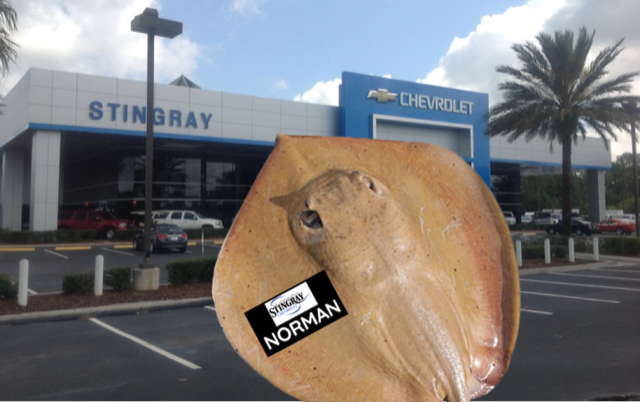 The giant stingray that killed Steve Irwin, the beloved Australian zookeeper, television personality, wildlife expert, environmentalist, and conservationist has been hired as a sales associate at Stingray Chevrolet in Plant City.

The cartilaginous fish known scientifically as “Myliobatoidei” was wearing a nametag reading “Norman” and talked to Tampa News Force on his first day at the new job.

“I’m really thrilled for this opportunity to start a new chapter in my life. And what could be a more perfect fit for me, a stingray, than a sales position at Stingray Chevrolet!” he said excitedly. “I think I’ll do well in sales. Maybe not as well as a shark, ha ha! But biologically, I am in the shark family. I’m a stingray!”

When asked about his notorious past, he acknowledged that it will always be something that follows him but he hopes people will eventually be willing to look past that.

“I think if people get to know me, they’ll find I’m just like most folks around Tampa Bay. For one thing, obviously I root for the Rays! I want a nice home, I want to raise my kids, I want a rewarding career. Sure, I’ve made some mistakes, but who hasn’t? I guess I could tell you I’ve changed but that wouldn’t be true. I’m a stingray. Hello!”, he said. “What happened with Steve Irwin wasn’t personal or done with malice. But again, hey, I’m a stingray.”

Dealership owner Steve Hurley says that Norman’s history was a concern and that there have already been several pre-hire counselling sessions with Stingray Chevrolet’s HR department. “I think at this point Norman understands that we would take a dim view of him piercing a customer’s abdomen with his spine, or barb, which produces toxic venom and is ominously fashioned with serrated edges and a sharp point. That kind of thing could result in serious disciplinary action. That’s just not how we treat our customers here at Stingray Chevrolet” he says. “Although to be fair, taking the unique circumstances of this particular situation into consideration, we’d probably give him at least three warnings. I mean, after all, he’s a stingray.”