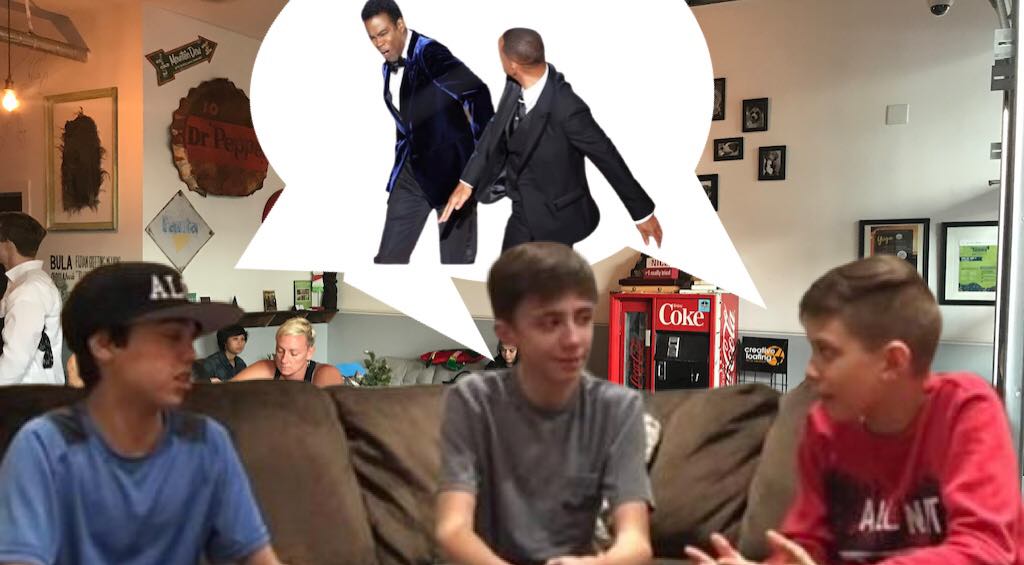 Three of Tampa Bay’s best up-and-coming humorists gathered at a St. Pete kava bar yesterday to discuss the ramifications that the recent confrontation between comedian Chris Rock and Will Smith will ultimately have on the Tampa Bay comedy scene and the institution of stand-up comedy itself.

Smith took the stage at the 2022 Oscars to smack Rock in the face after the comedian made a joke about Jada Pinkett Smith’s hair.

The comics, Mike Hurrl, Fooly Joe and Tyler Tylerson met up at the Foggy Zen Kavaterium in St. Petersburg prior to an open mic being held there later that evening, expressing their concerns about the incident, how it has already affected them and what the future could hold.

“This is the greatest thing to hit comedy since fat 50 Cent performed at the Super Bowl,” said Hurrl.

“I stayed up all night Sunday night and wrote a whole new hour about it!” he said, referencing material that is actually closer to about four minutes in length.

“Hell yeah,” agreed Fooly Joe. “I can’t wait to do all my new stuff, which I’ve already posted to Facebook, Twitter, Instagram and Tik Tok, along with everybody else doing the same thing with mostly the same jokes.”

“You guys are crazy. This is a terrible thing for comedy,” dissented Tylerson. “This sends the message that if an audience member doesn’t like a joke, it’s okay to assault the comedian.”

“All I can say is if somebody comes at me like that during one of my shows, I’ll have no choice but to kick their ass,” said Tylerson, who along with his two colleagues has never been booked on an actual show, or written a joke that elicited any emotional response beyond smatterings of gratuitous and patronizing, pity-based laughter or kicked anyone’s ass under any circumstances whatsoever.

The three, who share nearly six months combined experience as comedians, continued to discuss and debate the various aspects of the situation throughout the evening, including a united belief that Will Smith obviously doesn’t know anything about comedy, a conclusion arrived at while talking loudly during all the other performers’ sets.