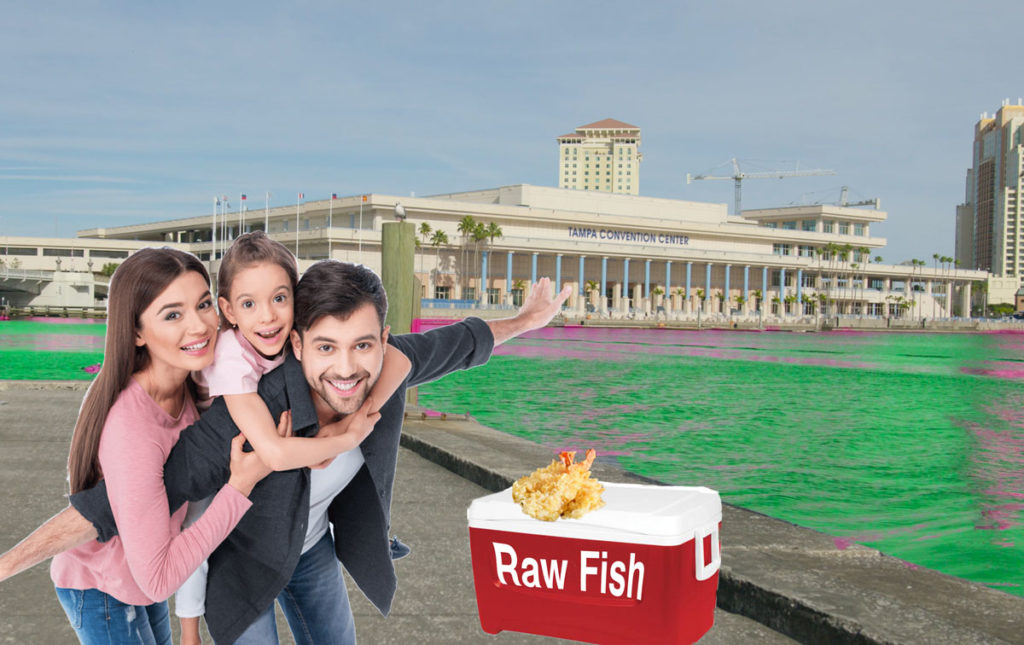 During a special promotion from NoHo Sushi, the entire Tampa Bay will be turned into a tempura oil fryer, and citizens will have the opportunity to toss whatever they want into the bay and have it instantly tempura fried.

“This is the best promotion I’ve ever been to, and I’ve been to a lot,” says Charles Marx while wearing a plaid gray vest and a felt fedora. “I’ve been to Chili’s Silly Willy’s where Chili’s gave out hot dogs for 50 cents, while 50 cent music played on the Jukebox.”

Marx checked his pocket watch for a long moment, “I went to Jazz Fest in New Orleans in ’13 Phish was dope, I’m sorry what were we talking about.” He forgot what we were talking about and moves on.

Marx is the Bayshore Board of Decision Making Alliance’s co-secretary in charge of the Waste Division, and he has a sick flat in Seminole “High” where he is starting a Silicon Valley data-partnership to organically grow kombucha in his old sewing-machine room leftover when his residence was a 1940’s industrial factory.

The bay will be filled with vegan gluten-free oil, so all dietary types will be included in the festivities with no limitation. Most people plan to bring fish, but others have less orthodox ideas.

“Yea, I’m bringing a bag of potatoes,” says Matt Finnegan. “I think it’ll be funny, I mean we have baked potatoes and french fries, and mashed potatoes, and other fried kinds of potato dishes.” He scratched his balls. “But a whole bag full of potatoes? That might be a whole new thing we’ve never even thought of before… But yes, to answer your question, I was in prison for trafficking narcotics and lying about it under oath.” I never asked anything about his prison record, I don’t know what he’s talking about. It seems like everyone here is having memory issues.

After I walked up and down Bayshore watching everyone toss their choice meats into the tempura bay, I notice that they all seem “high” in some sort of way. Are they ingesting oil-fumes that aren’t normally acceptable to breathe in? I started talking to more people.

“My momma brought me a gator on my 5th birthday!” A woman who was clearly at least 45 held up her hands to hold up 7 fingers. “Now I’m throwin’ that gator into ‘Tempura Bay!’” She tossed the 200+lb gator into the tempura bay as a large splash hits numerous onlookers to shrieks of pain and delight.

A cop started shooting his gun into the tempura bay and I couldn’t see what he was shooting at, but he does not stop. Round after round into the hot tempura. I saw his pupils go completely white, totally blinding him, so tackled him to the ground and rip the pistol from his hands.

“What are you doing man, get it together!” I screamed as I tried to shake him back into consciousness.

He easily threw me off like a rag doll to his big strong cop.

“You’ve made a huge mistake!” The cops pupils turn back now and he’s conscious. He pointed the gun to my forehead as I panted on my knees. As he goes to pull the trigger, he is struck by a car that accidentally swerves out of its lane because they’re driving too fast.

“Bayshore,” I say as I dust myself off.

People continue to toss everything you can imagine into the bay at record speeds. Full sprints with handfuls of items, into “Tempura Bay.” I look around with a smile of relief. “Chaos.” I say. “Pure chaos…”

My Uber showed up and the driver asks, “Where are you going? It doesn’t have a location on the app, even though it’s required to get an Uber, somehow you’ve operated out the system because you’re a vagabond who does what he wants when he wants.” I smiled.

“Take me wherever the sun is shining. That’s where I want to be…” He looks at me with an empty expression. “Okay…” He’s extremely uncomfortable now, his whole perception of me has completely changed. “I’m just gonna drop you off at the McDonald’s off Kennedy if that’s ok.”

← Extreme Coffee Shop Makeover Consists of Board GamesDavid Straz campaign accidentally changes slogan to ‘How much money do you fuckboys want?’ →