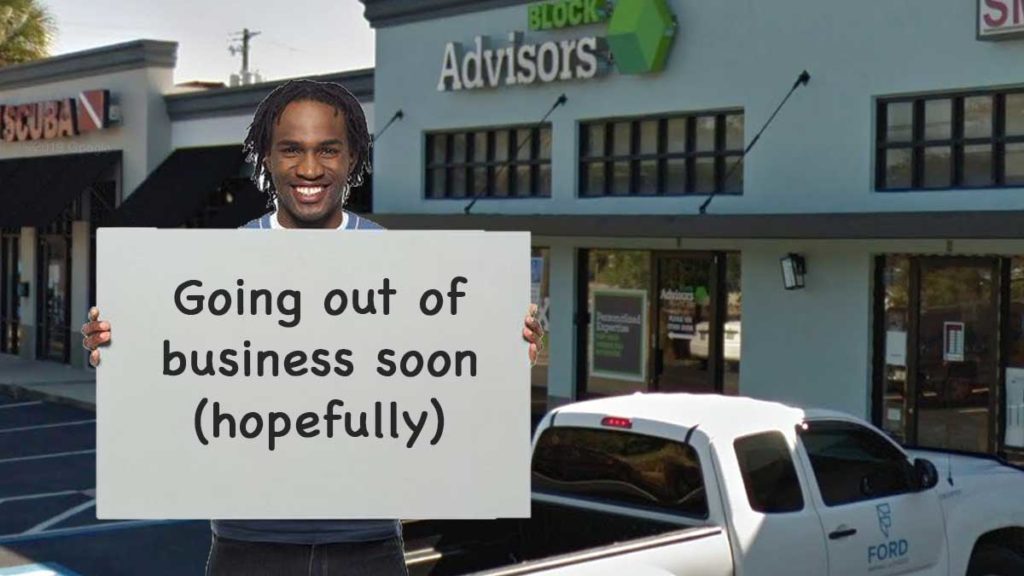 Tampa Bay Area merchants who operate traditional brick-and-mortar retail stores are hoping to be put out of business soon, in order to lease their locations to seasonal Halloween pop-up stores.

“I’m starting to get nervous; it’s September and some of those stores are already open,” says Susan Gligart, owner of Aunt Suzy’s Crafts and Yarn. “If I miss out on this last chance to cash in, I might as well stay open through Christmas and hope for the annual miracle that never happens.” Gligart continues, “More likely, I’ll make just enough on Black Friday to limp through another year,” as she knitted what I thought was a lovely azure-colored scarf but was actually a lovely azure-colored noose.

Gligart is just one of many waiting for the inevitable death blow to be delivered by online platforms like Amazon, Uber Eats and others.

“Just end it already,” says Jason Klishdren manager of men’s clothier Suits U Rite. I’m tired of showing up every morning, expecting the doors to be padlocked, and then actually experiencing more dread than relief when they aren’t. It’s just one more day delaying the inevitable.”

“I have it coming,” Flashworth said before spitting some chewing tobacco on my notepad. “Everybody told me opening a baseball card store in 2012 was an incredibly stupid idea, most notably my wife at the time. Of course they were all right about that but I didn’t listen and now it’s time for me to pay for it, and my child support obligation. But hopefully not before I can cash a check from the people who show up to sell Halloween crap every year. That would soothe the burn a little.”

Laura Frischtishtas, regional manager of A-Pumpkinlypse Now Halloween Megastores tells the merchants to be patient, but not too patient. “We’re on our way and we’ll be looking at any abandoned structure with four walls and a roof. The sooner you turn off the lights and post the CLOSED sign for the last time, the better. Hang in there, Aunt Suzy! Ha ha ha!”

She says the Suits U Rite location is ideal. “In addition to the decorations and novelties we display on the walls and around the floor space, we’d love to keep all the clothing racks he’s using to stock pants and jackets nobody wants. We’ll use the to display our costumes for whores and the small handful of costumes for kids and adult males that we carry.” She says her company specifically looks for businesses that were at least partially successful at one point. “We keep just enough of the original decor showing so you can tell that it used to be a place where people who had hopes and dreams spent time before something tragic happened. Like a haunted house.”