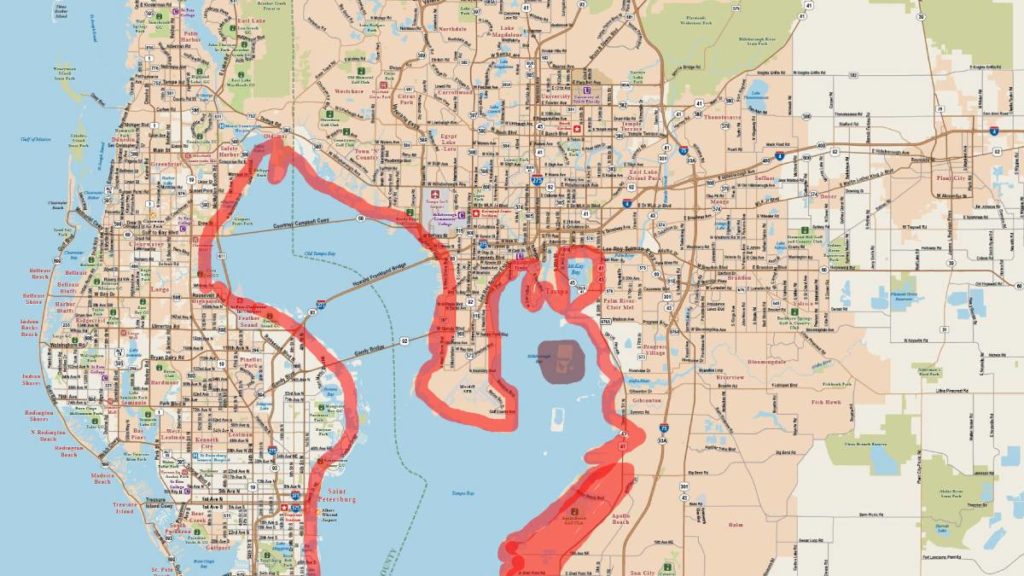 Plans to expand the Tampa Bay are now underway, as a massive effort to widen the entire bay in every direction is now being considered very seriously by local government officials.

The radical plan calls for an expansion of the Tampa Bay 100 meters in every direction, effecting many parts of the city. Numerous counties will have new zoning laws along with the demolition or renovation of countless homes lining the bay. No money is expected to be included in the budget for the families facing the issues that come along with the change.

Bayshore buildings are assumed to be developing stilt concepts to keep those structures dry and accessible, while also allowing room for new water-based businesses to build store fronts such as wet bars and literal dive bars.

There will be a new beach fashioned after the famous Rio de Janeiro beaches in Brazil. There will be a new publicly funded jet ski public transportation system. And finally there will be a new island artificially constructed in the center of the new giant Tampa mega-bay where hunger games style battles of fate will take place, with tributes from all Florida counties participating. Locals have responded well to the news of potential change.

“Yea, I was getting tired with the way things were anyway,” said Jared Boinker. “I miss my friends I used to play Halo 2 with on the internet up north!” He said. “If they change the bay to look like this it will remind me of a map in Halo 3, which looked just like this one, which I know isn’t Halo 2, but just the fact that it looks like a Halo map reminds me of my friends, and that’s good enough.” Jared threw up some sort of soluble bile on my feet. “Sorry, I had too much Molly earlier.” He wiped his mouth and hopped back on a motorized skateboard. As he rode away his hair which reached past the back of his heels got caught in the wheels and he flew from his board onto the street, but got up and laughed, along with some other people who witnessed it.

The change will only take place if local officials can all come to an agreement for a modest realistic budget, reportedly somewhere around $17 billion.

“We expect this proposal to pass quite smoothly.” Said Derrel Reddick, head chair of the 16th district. “Every one of us will be immensely wealthy if this deal goes through, and we’re all very concerned with acquiring more wealth corruptly, so this thing is totally right up our alley.” Derrel did a carthwheel, and farted halfway through, shitting his pants. “Oh no, I doodied my diapeys!” Derrel said in a jestful manner. The rest of the district chairs laughed along with him.

A vote will be taken after 15 more public meetings where the government will pretend they’re considering the publics feedback, however they will go forward with the plan they had in mind all along.

“We love giving people the illusion of change.” Derrel shouted at me from the other side of the local representatives cafeteria “We’re going to move forward with this plan, but we want to say that we’re thinking about it so people think that they have some influence on us, but in reality we totally make all the decisions despite anyones passionate pleas!” Derrel high fived a boy scout visiting on a field trip.

Citizens are urged to take pictures of the bay now for pieces of personal history to remember what the bay looked like before the major change.

There will also be a city-wide curfew enforced on all residents stating no citizens will be legally allowed to remain outside past 9 PM. That issue will not be addressed any further, and doing so will deem you liable for capital punishment.