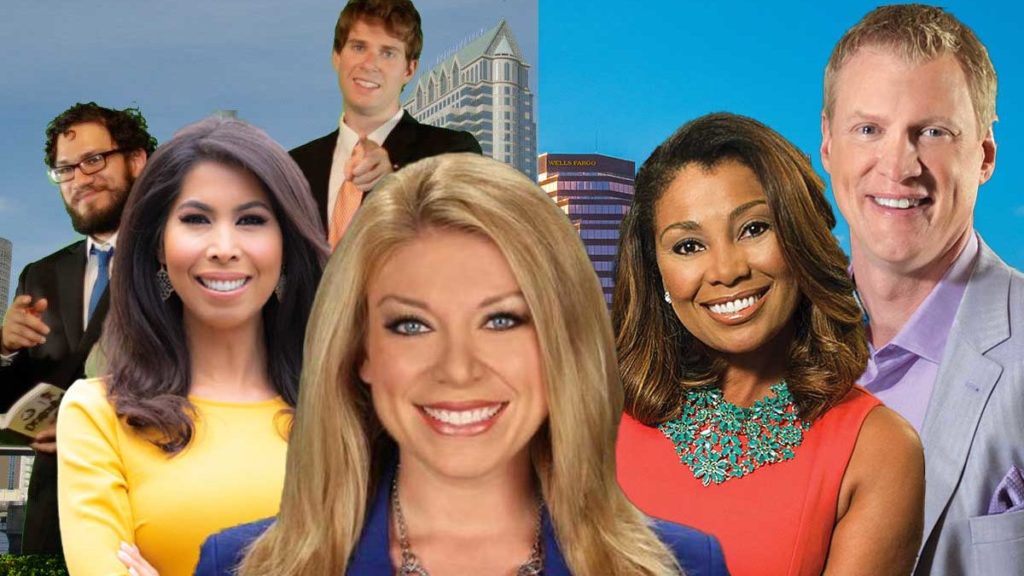 Journalists all across the bay have been trading places in a city-wide mass media anchor swap, a program which sends journalists from one station to another, giving them perspective on what the other channels are like and gaining valuable feedback which helps improve all outlets alike.

Steve Jerve was sent to FOX for the day, which was met with much applause from the spectating audience.

“I got TNF” said Haley Hinds holding back her disappointment.

“Who?” The audience asked.

“Boo!” The crowd started yelling. “They’re not a real news team, they don’t deserve to participate in the swap!”

The crowd grew unruly, but the head journalist quickly shut things down.

“Everybody relax!” Said Lester Holt. “They’re only paying me $10,000 to host this ceremony, and I demand respect while the hat is spitting out announcements!” He yelled.

“I’m out of here, you guys deal with this.” Holt said, leaving the ceremony.

A beer pong tournament broke out and the journalists exited while the crowd preoccupied themselves.

“I’ll call you guys from the top!” Joked Jerve to the rest of the journalists as he headed to his convertible.

“Yea right!” Said Riley, “I’m going to be living the high life over at NBC, I’m not doing any work today!”

They both turned to Hinds and their moods became more professional. “I’m sure you’ll enjoy your day too,” Said Jerve.

Hinds looked up. “Yea. It will definitely be an experience,” she said with feigning optimism.

Suddenly a 76’ VW wagon rolled into the parking lot of the Chili’s that was hosting the journalists picking ceremony. Two raggedy looking guys in suits sat inside the car, smoking menthol cigarettes with the windows up.

The custom suicide doors opened up, smoke pouring out from the main cabin, Jerve and Riley coughing as they tried to inconspicuously exit the scene, leaving Hinds to meet her new news team for the day.

“Hop in,” said the guy sitting in the front passenger seat.

Hinds cautiously inspected the interior of the smoke-filled vintage automobile. “So what’s the news today?” She said while politely entering the car, trying to sit down without really touching anything because it looked messy.

“The news is you!” The guy said, ashing his menthol cigarette in the cupholder, already full of butts.

“What do you mean?” She said with slight concern.

“We mean, we’ve never had someone so established associated with the team, so we want to interview you, so we can shape our news team to be more professional and effective.” Said the guy who now looked less raggedy, and more goofy and cute.

“Oh.” Hinds said, surprised by the put-together tone of the guy. “That’s fine, what kind of questions do you have for me? How would you like to interview me, is it a video segment or written piece?”

“We’d like to do a video interview, if that’s ok with you,” The guy said.

Suddenly the car was side swiped and it flipped over numerous times before coming to a halt in the middle of the road. Everything was a haze.

“I’m ok!” Hinds shouted, with no response from the driver or the other guy. “Can you guys hear me!”

They didn’t move. Haley crawled through the mangled car to see both men unconscious.

A pool of gasoline started to puddle out front of the car. Hinds was able to pull both men from the car right before it exploded in a fiery blaze, causing a huge scene and drawing attention from all the other cars on the road.

Hinds took a deep breath to compose herself and process what just took place before a FOX news truck drifted in really fast from out of nowhere to a stop right in front of her.

“Haley, thank God you’re here! Veronica Cintron was supposed to be our field anchor today, but she hasn’t showed up yet! We need you to do the news for us!” Said a camera man who had emerged from the side door of the FOX van. “Quick take this!” The camera man threw Haley a microphone and hit record as he framed up Haley, giving her the signal to start reporting the news.

“Hi I’m Haley Hinds with…” She stopped. She looked back at the burning 76’ VW van with the two Tampa News Force men pathetically passed out on the ground next to her.

She had a flash back to being a child in her first elementary school journalism class. She saw her teacher, Mrs. Nervon’s face, “Remember Haley, journalism code is everything. And if there’s ever a mass media anchor swap one day, I want you to stay loyal to whatever outlet you’re assigned to. Because that’s important.”

Hinds snapped out of it, the camera man was staring at her frustratedly, silently motioning for her to keep going, wondering what was going on.

Hinds looked into the camera, “Hi I’m Haley Hinds with Tampa News Force, and I’m here on scene at a car crash that I was involved in. After getting picked up from the Chili’s parking lot with new news team for the day, we were side-swiped while driving West down Hillsborough avenue, and-“

Suddenly a helicopter crashed into an invisible spaceship which had been hovering above the scene.

The camera man followed Hinds as she moved closer to the crash site, revealing the first ever on-camera discovery of an alien life form.

“BLURM!” Screamed the alien, neon-yellow eyes refocusing as it tried to understand what just happened.

“I am Haley Hinds, from earth! I work with Tampa News Force, and I’m here to help you and interview you about what just took place,” Hinds said to the alien. She went on to interview the alien for six hours.

It won awards. She got a pulitzer and it was awarded the medal of freedom by the president for her bravery in the face of adversity and crisis.

The interview with the alien was viewed over 10 billion times on YouTube.

Tampa News Force made an insane amount of money off ad revenue for the video views and offered Haley Hinds a full-time position with triple her salary over at FOX.

“That’s a nice gesture, but I can’t accept,” saids Hinds.

“Why not?” Said the guy who used to look raggedy, then goofy and cute, but now looked just totally chiseled and handsome in every way that a woman could be attracted to.

“Because,” she said, “I’m not a Tampa News Force anchor, I’m a professional journalist, that was just for one day.”

The guy looked very sad. “I think it’s cool what you guys do, but it’s just not for me.” Hinds said, turning to leave.

The Mass media journalist swap program was never done or spoken of again. Tampa News Force has since pivoted from a fake-journalism satire website, to a green tea extract marketing portal. TNF no longer does news, they sell vitamin supplements and are a redirect from a local pranks blog. Nobody ever found out who the guys were in the car.