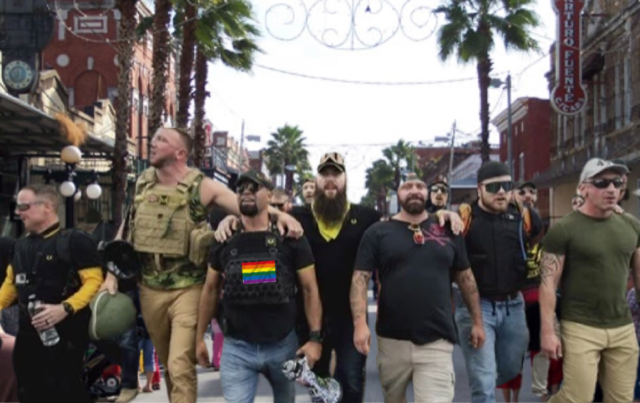 Russell Wheedler of Tampa is a member of the controversial far-right organization known as the “Proud Boys”, a group with a history of engaging in violent confrontations and that has been associated with white supremacy movements. He is very excited about new Proud Boys merchandise, clothing and accessories suddenly available for sale.

“I can’t wait to wear this new gear to the next rally”, he said. “Our message is clear and consistent as a politically incorrect men’s club for Western chauvinists, but it’s about time we spiced up our look a little. All the black and khaki and olive green was a little… drab.”

On Sunday, a flood of Twitter users began co-opting the “#ProudBoys” hashtag to show off images of LGBTQ pride, pushing posts made by neo-Nazis and white supremacists out of the feed. Wheedler is apparently unaware of this development.

“I wanted to do some on-line shopping last night and I did a Google search with the #ProudBoys hashtag, like I always do, expecting the usual array of monochromatic flak jackets, snapback caps and cargo shorts”, he said. “And what I found was all kinds of really exciting and colorful items that I had never seen before. I was thrilled! I bought some sparkly mesh tank tops and some skimpy denim shorts that will go great with my shiny black combat boots. I’ll be able to put perfect, eye-catching ensembles together for marches held during the brutally hot summers we have here. The goal is to be impossible to ignore. You know, for the sake of spreading the message.”

“It’s about time I zhuzhed up my lewk and serve up some zaddy realness”, he added.

Wheedler will be survived by his widow, whom he hates, and two teenage daughters, whom he deeply resents, when he’s inevitably stomped to death by his fellow Proud Boys when he shows up at a rally displaying his new wardrobe.