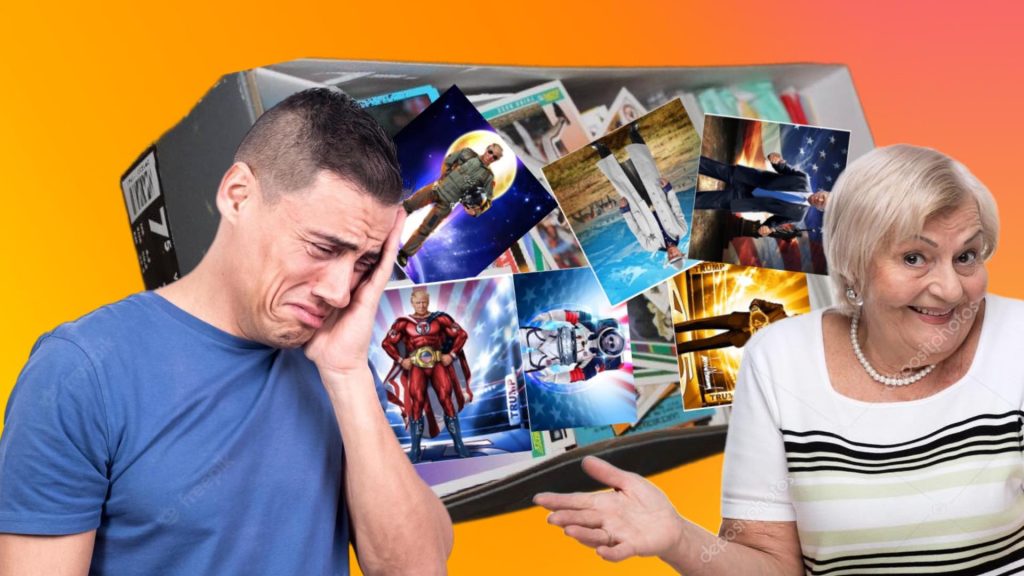 Scott Hamper recently discovered that his mother, with whom he lives in a house in Tampa, has thrown away his entire collection of Donald Trump cards.

“Mom! Jesus Christ!” he was quoted as saying upon learning of the situation.

The Trump cards, which are also considered non-fungible tokens (NFTs) cost $99 each and were issued exclusively via collecttrumpcards.com following “a major announcement” from the former president last Thursday.

– Donald Trump, announcing trading card depicting him as an astronaut, a fighter pilot and a cowboy among other things he’s never been.

Hamper bought the entire set of 45 cards for $4,455 because “they’re worth more like that.” He stored the digital codes in a shoebox which also contained prized collectibles such as rookie baseball cards of players like Gregg Jefferies and Todd Van Poppel (“Future HOFers!” claimed Hamper, “More useless trash, like those nudie magazines,” said his mom) on a shelf in the closet in his bedroom. His mother found the box and threw it in the trash along with a stack of nudie magazine as well as some broken colored lights and ornaments that her cat had knocked off the Christmas tree. “Sometimes Mister Mittens is so naughty,” she said.

“Mom! How many times have I told you to stay outta my room and keep your hands offa my stuff??” screamed Hamper, to which his mother replied, “You get a job and start paying rent and then you can tell me what in this house is ‘yours’.”

“I was going to use those to pay for my kids college education some day,” he said. “Good thing I would never let my kids go to college.”