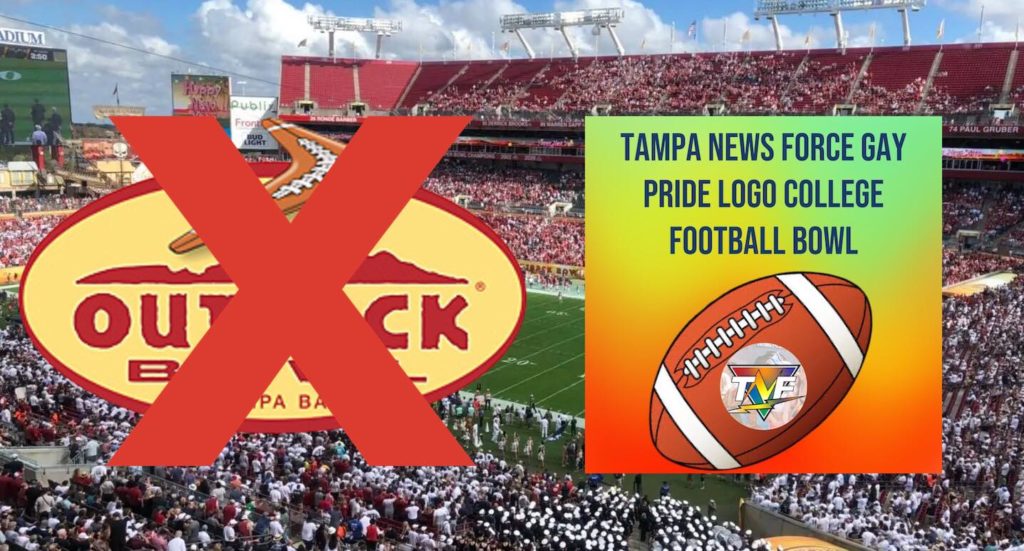 Bowl officials announced the four-year agreement Thursday afternoon during a ceremony at the Sunoco Station at the corner of Nebraska and Columbus Avenues.

“We are thrilled to welcome Tampa News Force as the new title sponsor of the Bowl,” noted Bowl Association Chairman Troy Atlas. “And the fact that they’re specifically listing it under their gay pride logo is… wait. Hold on a minute. They’re doing what now? Who approved this?”

“Hey, that crossdressing prostitute is stealing my car stereo! Help! Help!”, he added.

“Yeah, we like our gay pride logo a lot but we really only get to use it during June for Pride Month, which is a shame because it’s very pretty. But this should get it some more exposure, some more bang for our buck, if you know what I mean”, said Brock Bullfister, Tampa News Force Director of Sporting Event Naming Rights Acquisitions and Gay Pride Logo Placement. “First order of business will be sending some sweet 50-yard-line tickets and a couple of t-shirts to Governor DeSantis. We know that he’s just gonna love it because he’s a sports fan who supports local businesses like ours!”

The game will continue to be played at Raymond James Stadium on New Year’s Day. Its partnerships with ESPN and the SEC and Big Ten/ACC also remain unchanged.

“It’s basically business as usual, the same game fans have come to know and love over the last almost 40 years here in Tampa”, said Bullfister. “The only real change is the name. Well, that and people won’t have to try to talk with a godawful, phony Australian accent any more. Thank God.”