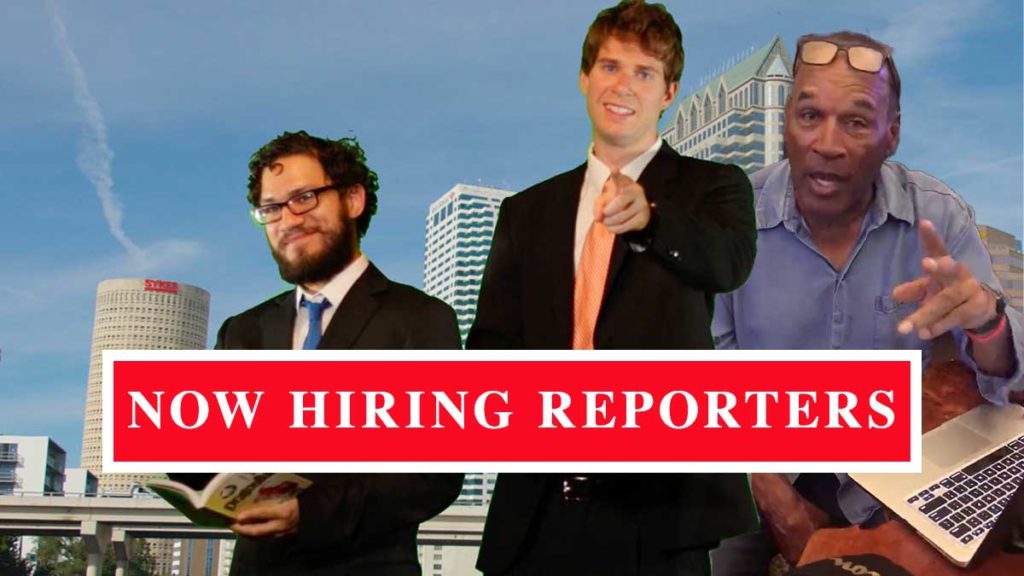 In an effort to continue spreading information, the popular and award-winning organization Tampa News Force has announced they are expanding their team.

“We are currently accepting all unsolicited news and images from folks seeking writing credits with the intent to publish them without any fact checking whatsoever,” said Tampa News Force co-founder and part-time virtual pastor, Josh Santos. “Every new reporter that is published on our site is guaranteed the same salary, dollar for dollar, we are getting paid.”

When asked how much Santos gets paid to write for Tampa News Force, he laughed and said, “You think I actually get paid to do this?”

Tampa News Force mainly publishes unnecessarily exaggerated and false news stories that focus specifically on the Tampa Bay-area. In the past, the organization has attacked Senator Rick Scott because he is a crook who made his fortune scamming Medicare.

Their large audience of mostly 18-34-year-old unmarried males frequently like their posts on Facebook, which is a good sign that maybe someday this thing will make money.

“If we ever turn a profit, we’ll pay whoever decides to even look at this thing,” said Santos while sipping on some whiskey 2,000 miles away from Tampa.  “I haven’t been in Tampa in nearly three months, personally I don’t even know why I’m still writing for it.”

The upcoming Tampa News Force hiring spree seeks to fill a need in the Tampa Bay-area where the only news source forces people to jump through pay walls to get a little bit of info not included in those pesky headlines.

“Honestly, if you have a subscription to Tampa Bay Times and want to just send us what they are writing so that we can publish it word-for-word on our sitem, we’d be cool with that.” Santos then excused himself to throw up and returned to finish his thought, “But for real we can’t actually pay you, if you think we are paying you for writing something on our website, then I have some bad news for you.”

Tampa News Force once attempted to pay a man for drawing a comic book based on a story they drafted, to this day they are still waiting on a draft so that they can share it, because the sketches they’ve seen look fucking sick.

We hoped that the year 2020 would be a great year for Tampa News Force, but seeing as how everything is going to shit, this is a perfect opportunity for anyone seeking to get their stories read in a community that has very little options when it comes to actual news.

“As far as print news goes, you have Tampa Bay Times and Creative Loafing, and both those papers suck ass,” said Santos who was getting drunker and more aggressive the longer I kept talking to him. “Really, what the fuck else are you going to read?”

Santos then went and made himself another Tiger Juice, which is one-part whiskey, one-part orange juice and half a lemon squeezed over it.

“I looked up Orange Juice and Whiskey because that’s all I had in my fridge and I wondered if I could combine them together,” said Santos who was hanging out naked in his kitchen. I asked him to put some pants on, but he refused.  “I’m home baby!” He said while stretching his arms out and holding a bottle of whiskey and a half gallon of orange juice.

Although he did binge watch the Tiger King documentary, Santos didn’t feel like he had any good takes on it, although he definitely thinks Carole Baskin did that shit.

“I lived off Nebraska Avenue for many years,” said Santos who did indeed live in the Seminole Heights neighborhood of Tampa for many years.  “Carole Baskin met her husband on a street that is famous for hookers and homeless people smoking spice. We have proof of that in the video linked below.”