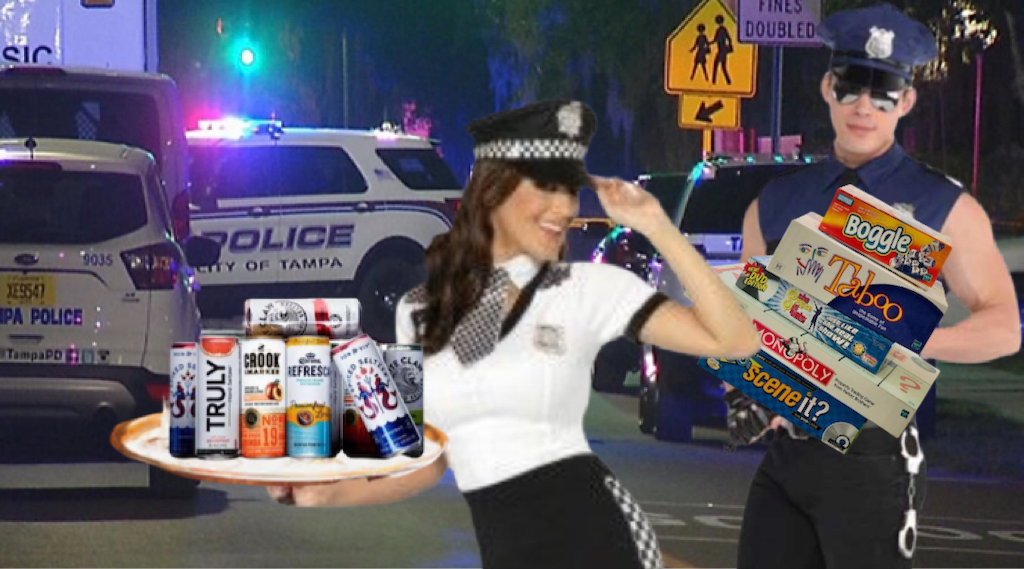 Over the weekend, Tampa Police Department tested out a new system for traffic checkpoints. Instead of looking for drunk drivers to arrest and keep roads safe, officers handed out hard seltzers.

No need to be alarmed, though. When drivers were suspected of being drunk, they were given a breathalyzer to check their BACs. Officers had bottles of water and containers of various cooked pastas on hand. They stayed with the drivers and played board games, such as, Sorry!, Taboo, and Risk, until they were sober enough to drive again.

TPD saw positive results and has decided to adopt this system for the whole city. Chief of Police, Brian Dugan said, “It’s worked so well that I think surrounding cities and counties are going to join in. I’ve already talked to Chris Nocco, of the Pasco County Sheriff’s Office and he said ‘Pasco’s been needing something like this for a long time.’ So I think this thing’s really gonna catch on fire like a drunk guy driving a car that’s on fire.”

TNF took to the streets to hear what Tampa citizens had to say about the new policy. Marcy Rubio, 44, of West Tampa said, “Yea, I fux with that. They better have White Claws and not that hot garbage Bud Light came out with.” At the University of Tampa, 99% of students were in favor of the new system. McKenzi Jersey, a sophomore studying public health, said, “Who thinks Tampa’s trashy now? Will liquor be an option? Just wondering.”

On the opposing end, Elise Usouf, of Temple Terrace complained, “I will not have such injustice. Who wants pasta when they’re drunk? Give us wings. Bleu cheese gang.” Alexander Howard, 39, of South Tampa scoffed at the policy, “Don’t they have better things to worry about? My neighborhood of suburban mansions isn’t gated. How come the media won’t cover that, hmmm?”

We’ll keep you updated on how the new checkpoints fare for the people of Tampa.