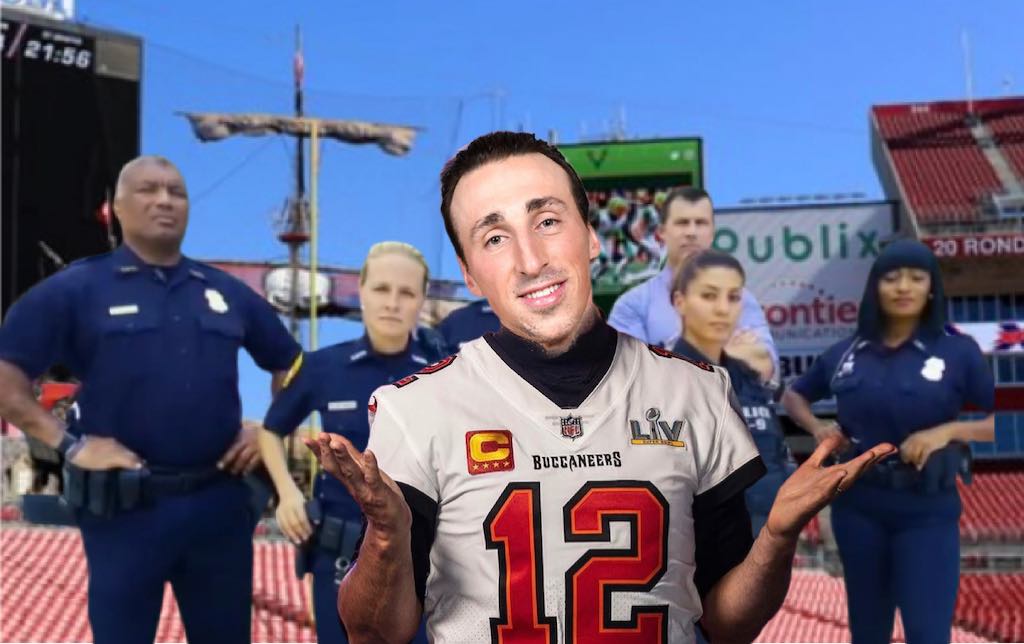 Tampa police have thwarted a plan intended to ruin the Super Bowl for the Tampa Bay Buccaneers, arresting a man visiting from Boston at Raymond James Stadium Friday morning.

“We’ve been getting reports that some creepy, rat-faced guy was going around licking people”, said police chief Brian Dugan. “At first, we thought it was probably the Ybor Shoe Licker but he just does shoes and he doesn’t have a rat face. This morning, we got a tip that the suspect was seen at the stadium and we found Brad Marchand trying to sneak in.”

The Bruins forward was the point person in an elaborate scheme hatched by bitter Boston sports fans which would have seen Marchand take the place of Tom Brady as the Buccaneers quarterback. Police found a diary in a backpack in Marchand’s possession at the time of his arrest with the most recent entry reading:

“Comrades, the hour of our revenge is nearly at hand! I have infiltrated the Tampa Baynians and am about to crawl beneath the barricades, enter their football rink and scurry into an air duct where I will hide until Sunday. From there, I will descend into the Buccaneers locker room, conk the traitor Brady on the head and assume his place and throw many, many interceptions to the Kansas City Chieftains.

If that doesn’t work, I will lick defensemen Lavonte David, Nadamukong Suh, Devon White and Shaquil Barrett, causing them to be distracted by fears that I’ve given them the Covid or worse. Either way, this abominable stretch of Tampa winning, often at our expense, will end with their crushing defeat on the biggest sports stage in the universe and the relatively recent glory that we have become accustomed to celebrating while somehow simultaneously bitching about being underdogs WILL return to Beantown, The Shining 4th Place City On The Hill, where it belongs!

In the name of Kevin Youkilis, this I swear!”

It’s not sure who else was involved in the plan and it’s possible Marchand may have been acting alone.

“Don’t try to drag me into this, please”, said New England Patriots head coach Bill Belichick. “This whole thing has been difficult enough for me as it is.”