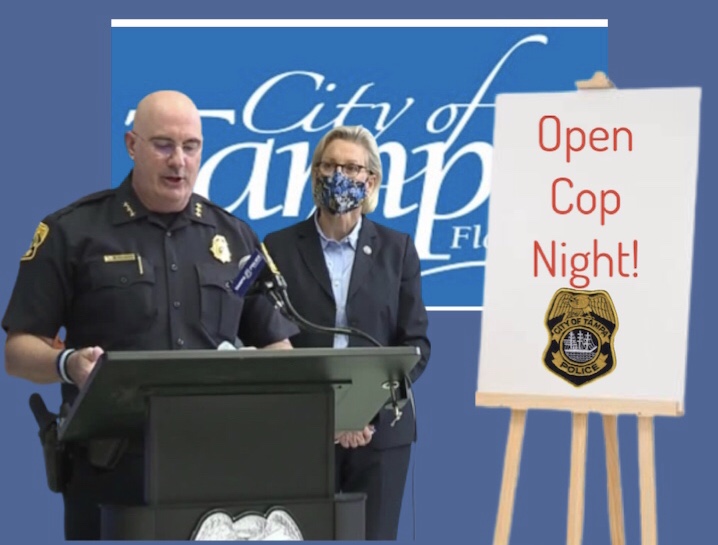 “Everybody wants to criticize our law enforcement officers these days”, she said, “You think it’s so easy? Okay, then you get out there and try it.” With that she pulled the cord on a tarp to reveal a poster that read ‘Open Cop Night!’.

At that point Chief Dugan stepped to the podium and explained the new program. “We’re giving people who’ve always wanted to be police officers their chance to give it a try, every Monday night starting tonight, a more robust and immersive experience than the standard ‘ride-along’. Each participant will be issued a Tampa Police car with a radio in it, a gun, badge and hat and assigned a shift that begins at 8pm and ends on 8am the following morning, during which the participants will do police work, responding to calls and such. We’ll put out a list around 7pm and it’s first come, first served as we’ll have a limited number of spots. If we don’t get you up that night, we’ll have a rollover list that will guarantee you a spot the following week.”

Mayor Castor then added, “And whoever has the best cop shift of the night will be offered a paid featured cop spot! That will be determined by whoever solves the most crimes and harasses the fewest innocent citizens.”

Carla Weeters of Tampa Heights is excited about getting involved. “I’m going to sign up as soon as the list drops!”, she says. “It’s always been kind of a bucket list thing for me, to be able to run red lights without getting in trouble and stuff. I’m going to get a bunch of my friends involved and put it on Instagram!”

Officer Richard Nickels, an 8-year veteran of the force supports the program but doesn’t anticipate great results. “We ran some tests and most of these open coppers are terrible”, he says. “Most of them will probably shoot somebody, brag to all of their friends about it and never do it again. Some will pursue it halfheartedly for a while and eventually quit. A small handful might actually be good enough to make something out of it. That’s really the best case scenario. We’ll see.”