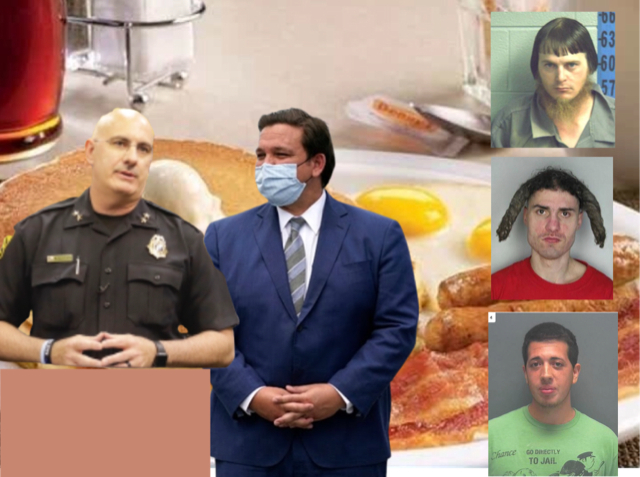 The men, identified as Liam ‘Shitty’ Neall, Kyle ‘White Pookie’ Saunders and David ‘Mo’ Lester, were caught in the act of planning to kidnap the governor and bring him to Denny’s at 2004 N. Dale Mabry and make him eat banana pancakes, pay for everyone’s breakfast and then take him to the nearby Mons Venus strip club and make him pay for everything there as well.

They were apprehended midway through their breakfasts at the Denny’s at 2004 N. Dale Mabry by Tampa Police officer Mike Higgins who was sitting at the table right next to them. “I heard everything they said,” says Higgins. “They were really loud. I was going to tell them to keep it down because they were being so rowdy. Then I heard what they were talking about and I arrested them as soon as I finished my coffee. Easiest collar ever.”

The plan was apparently rooted in the men lacking enough money between them to pay for the Double Berry Banana Pancake breakfasts they’d ordered and were consuming. “I don’t know, boys, we gotta do something… give me some ideas of what we can do,” said Neall. Saunders replied, “The price of freedom is eternal vigilance, and indifference to this notion is the means by which the people can and will secure their own oppression. Wake the f— up”, to which Neall responded, “What the f— does that have to do with pancakes, dickhead?”

That’s when Lester chimed in speculating that Governor DeSantis is probably very wealthy (“you just know he’s a rich c—“), wealthy enough to not only be able to pay for their breakfasts but for a midday trip to the nearby world-famous strip club as well.

Neall and Saunders agreed with this assessment but didn’t see how they could convince DeSantis to eat with them and then go look at titties.

“Snatch and grab, man,” Lester said. “Grab the fuckin’ governor. Just grab the bitch. Because at that point, we do that, dude—it’s over.”

Higgins had decided he didn’t need any more coffee (“I felt like my back teeth were floating”, he said) and made the arrests on the spot after a quick visit to the restroom.

DeSantis praised the effort of the TPD. “I’m so glad these brave public servants were on the job. I hate banana pancakes.”