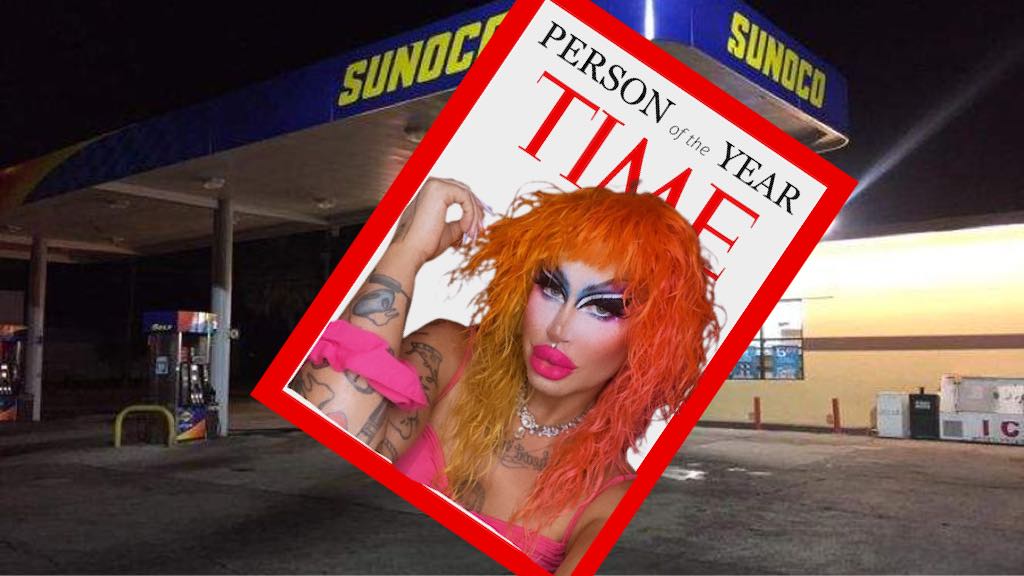 A Tampa prostitute named Merth has won TIME magazine’s Person of the Year title, after a unique story which has led to Tampa becoming one of the most popular places in the country.

Her story began at the Sunoco gas station on the corner of Columbus and Nebraska Ave.

“A man in a pick up truck said ‘what’s your name?’ And I said ‘Meth!’ Cause I wanted some meth, but he misheard me and said, ‘Merth?’ And I liked the way that sounded because it reminded me of my favorite thing, so I said, ‘yea! Merth!’” Explained Merth, a skinny woman with ripped stockings underneath a cut-in-half trench coat which resembled a dress, along with a bright orange wig.

Merth had been a full-time streetwalker for 6 years when she stumbled into a wealthy man in a suit at a sandwich shop in Tampa Heights.

“I was going to a spot where they let me use the toilet, because I give half-off to the cashier, and while I’m in there, I come out the bathroom and this rich guy is standing there, and he’s on the phone, and I overheard him say something about a famous football player was considering moving to Florida. 3 of my cousins were former players for the Bucs, so I thought, ‘dang, that would be cool if the player was coming to Florida. Anyways, fast-forward 3 hours, I’m on my usually corner, and who pulls up in a limousine but that guy in the suit!” Merth, then ashed her cigarette  into a sprite can she had tucked into her waistband.

“The guy in the suit said, ‘get in,’ so I got in, I start doing sexual things to him, he does his thing, he lays back for a minute, a business card drops out of his pocket, and it’s written in what looks like an ancient language with some yiddish words mixed in, and I knew he was important, and I know he mentioned the football thing earlier, so I immediately took a picture of him with my pay-as-you-go cellphone, and I mass texted it to my network of sex worker friends, and I told him straight up, ‘you can kill me, but if you do, the picture I just sent of you with your pants down will be all over the internet, and I might not know who you are, but I know you’re working with a famous football player, so you tell that football player to go to the Bucs, or else you’re in big trouble.’” Merth detailed enthusiastically, swinging her now unlit cigarette about.

“Boy, you should’ve seen the fear in this mans eyes and the range of emotions he went through in a matter of seconds. Ultimately he laughed and said, ‘you’re the smartest dumb b**** I’ve ever met in my life. f***ing hell.’ Then he picked up his cell phone, sent a few texts, and said, ‘alright, it’s happening, then kicked me out of the car. He said, ‘I’m not paying you for the sex, consider that blackmail you got away with payment.’ I said, ‘No, give me the $5 or I’m having that picture go up.’ He laughed again and said, ‘Wow, you really are a smart dumb b****.’ Then he wrote me a check for $5. Anyways, a few months later, Tom Brady was on the Buccaneers, Tampa won the Super Bowl, and now the rent is higher in Tampa than it is anywhere in the country. None of that s**t really effects me, but I did get a sweet Super Bowl hat from a recent customer so that’s cool! I told him my story of the blackmail, and this guy happened to be a documentary maker, he got in touch with TIME magazine, and here I am right now receiving this Person of the Year award. Life really is a trip.” Merth said, relighting her cigarette before security came up and told her to put it out.

“I’m the person of the year!” She hit a pose, spit on the floor, and exited the Marriott lobby where we were conducting the interview.