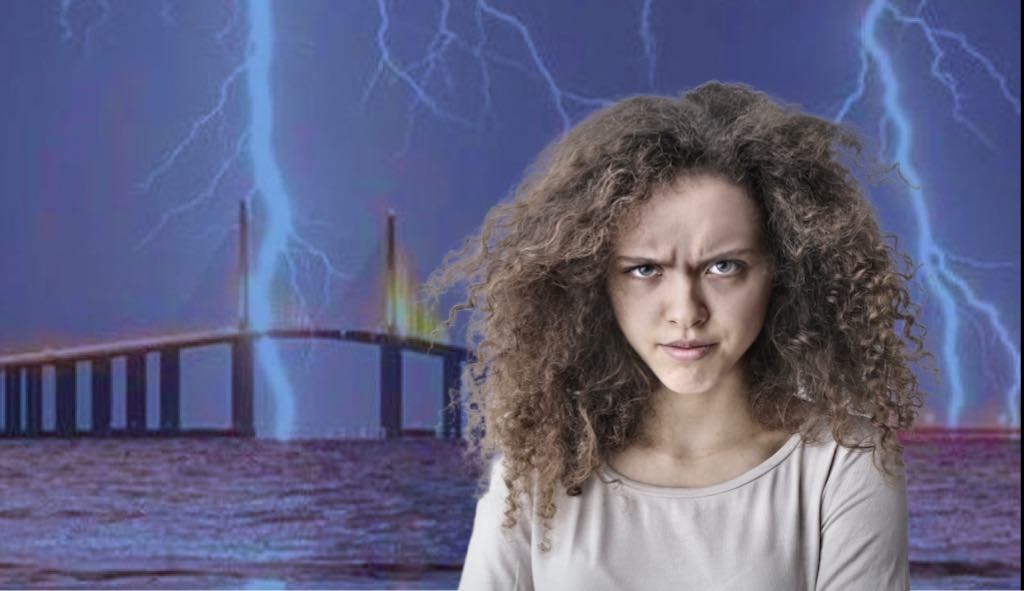 Belinda Kneater of Tampa doesn’t understand why she’s not allowed to hang out at the top of the Sunshine Skyway as Tropical Storm Elsa rolls through the area tonight.

“My body, my choice, right?”, she said. “Well, my body chooses to drive up to the top of the Sunshine Skyway, park, and eat hot dogs and drink root beer while I watch nature unleash its fury, as specifically mentioned in the Bible and the Bill of Rights.”

The bridge typically closes when wind speeds exceed 40mph for a sustained period. Based on the current forecast, the bridge is expected to close sometime around 8pm tonight, and then re-open sometime mid-day tomorrow.

“It’s not even 8pm!”, she said. “But those oppressive government thugs made me move along. I’ve got four hot dogs, a six pack of A&W root beer – none of that Barq’s crap for me – I’m ready to go!”

“I’m a tax payer. I pay for the damn bridge. I also pay a toll to access it, which is double taxation without representation, if I’m not mistaken”, Kneater said mistakenly. “This is the problem in America. Our rights are being stripped away day-by-day. First, they come for your guns. Before you know it, they’re coming for your hot dogs and root beer.”

“I’m not forcing my views on anyone else”, she continued. “If you don’t want to grab some hot dogs and root beer and hang out with me at the top of a 430-foot high cable-stayed bridge spanning the Lower Tampa Bay connecting St. Petersburg to Terra Ceia to watch a storm with sustained winds of 70mph, don’t do it. You don’t have to. But who am I hurting if I want to do it?”

“Just her, I guess. She’s the only one who could be harmed by her reckless behavior,” agreed Trooper Emmons. “Oh. And any first responders who have to put themselves in danger trying to rescue her dumb ass when something happens.”

“All my life, all I’ve ever wanted to do is watch a Tropical Storm from the top of the Sunshine Skyway while eating hot dogs and drinking root beer. Now I can’t even do it”, she said. “This is not the America I grew up in.”