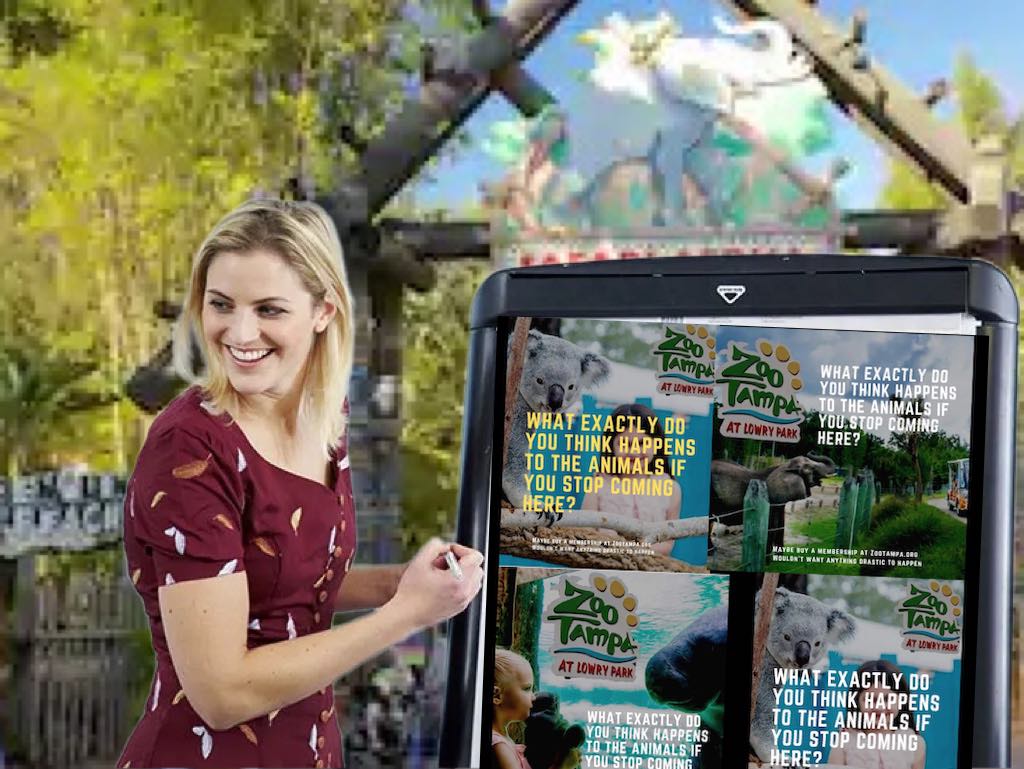 ZooTampa At Lowry Park, Tampa Bay’s local zoo, has stirred up recent controversy with is recent campaign: “What exactly do you think happens to the animals if you stop coming here?”. Critics claim the slogan elicits fear on behalf of the animals. Here’s what Tampa Bay zoo visitors have to say:

One local visitor to the zoo, Ethan Pleasedontkillthemplease, Age 8, stated the following after this reporter suddenly darted toward the child to show him the threatening image on text:

“Please don’t let the koalas die I don’t want them to die!”

Mr. Pleasedontkillthemplease cried like a little girl and refused to comment further on whether the monkeys running out of food was of particular concern to him or whether his concern started and stopped with Australasian marsupials. In fact, he ran away cowardly to his rather stern looking mother who was talking to some mall-cop looking motherfucker.

After the Zoo loudspeakers randomly, or perhaps routinely announced that all field trips are to remain undisturbed by local reporters, I decided of my own accord to go in a different direction.

Several people may have misheard me as saying to the security officer “Fuck you monkey pig! You’ll fry in hell like the bacon you are!” But actually I said something normal and cool. Then Mr. mall cop escorted to the main office, and they didn’t even breath test me, which was NUTS.

After the zoo casually brought up not trespassing me this time, I scored an interview with the Tampa Zoo CEO. Said CEO Mike Liddell (no relation) “Zoos are for education. To teach people things about animals which they didn’t know. For example: when Zoos close, the panthers die. We’d probably have to gas them.”

It was at this point I noticed he had a veterinary scrip lying on his desk already filled out for Ketamine, so I had to stall while I figured out how to fraudulently and feloniously pocket that item for drugs. So I asked “Was Harambe like zoo 9/11?” And he calmly said yes. Harambe was like zoo 9/11 after all. There was an awkward pause but I was thirsty for some K so I asked him “Tell me more about Zoos, fat boy.”

As he glanced down at his frowning reflection in the burnished wood desk, He said “I wish we had a zoo with NO B Tier animals. Just name brand animals only. This is my dream. The coca cola of zoo stuff:

A Tiger and a Lion who are friends? Whaaat?

Chimps who are allowed to KILL

“If you came here to see lemurs then fuck You!!!!” He added, with joy in his eyes for the first time all day.

“Whoa, that’s really cool, wait is that a giraffe that’s escaped?” I said and when he turned I criminally stole his Special K pad.

He added, “Bit of an industry secret, but zoos basically exist to familiarize the public with elephants in order to decrease the shock value of War Elephants against American infantry. Romans didn’t have Zoos. That’s why Hannibal got them so good in the second punic.” Liddell (no relation) continued to discuss the intricacies of Mediterranean trade during the Roman Republic and how unresponsive Hillsborough county is to the idea of hosting venatorial games of animal murder and/or wombat combat taking place in ZooTampa in in Raymond James stadium.

Then I snorted some K later and got a million dollars and I got voted the specialest boy in the whole wide world everybody likes me the end.