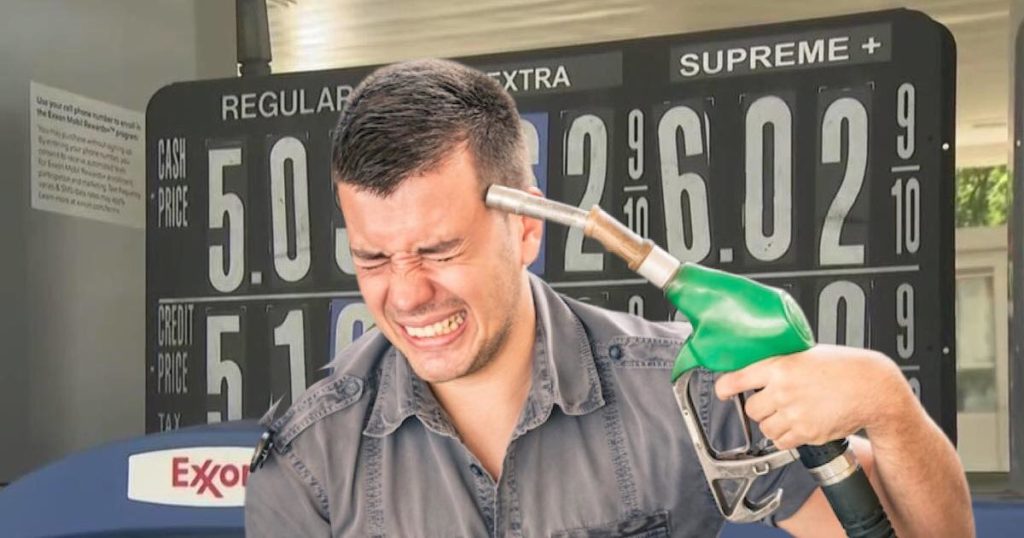 This is a list of the locations in Tampa, which have the cheapest gas.

Your gastrointestinal tract produces a decent amount of gas, depending on what you’re eating. Beans makes more gas. “The more you eat, the more you toot.” Is a famous phrase popularized in a juvenile rhyme we learned as children. Just excrete directly into your gas tank and that should work.

The spot down the street from your place has pretty cheap gas. I think it’s called “Gas” or something. I don’t think it’s one of the big chain gas stations, I think it’s a mom & pop place that pumps their gas directly out of the ground they live on. Real nice people. Fred, I think is the guys name who works the day shift. He has a large scar from his left ear to his right calf. Always talking about the Moderna vaccine and the Juventus soccer scores. Go there for cheap gas.

I’m not sure exactly where that is. I know it’s on a world map if you can find one or Google it. In that ocean there are oil refineries, and if you show up with your own container, they will let you fill up right there, and it will be cents-on-the-dollar, compared to the overpriced pumps we’re currently dealing with at our roadside gas stations

The movie Monkeybone on VHS starring Brendan Fraser was actually made during a time in film production when VHS tapes were made using petroleum oil. If you melt down the VHS tape of Monkeybone, it translates to the equivalent of about 6 gallons of unleaded gasoline. Best results if melted down in a microwave, just be ready to capture the gas in a cup afterwards.

Every night around 1 AM, the Dunkin Donuts on West Kennedy throws out all of the gasoline they didn’t sell during the day. If you wait by their dumpster around back at that time, you can get some free gasoline if your able to fight off the raccoons which will also be trying to power their spaceships which they use to fly around with Starlord and Groot.