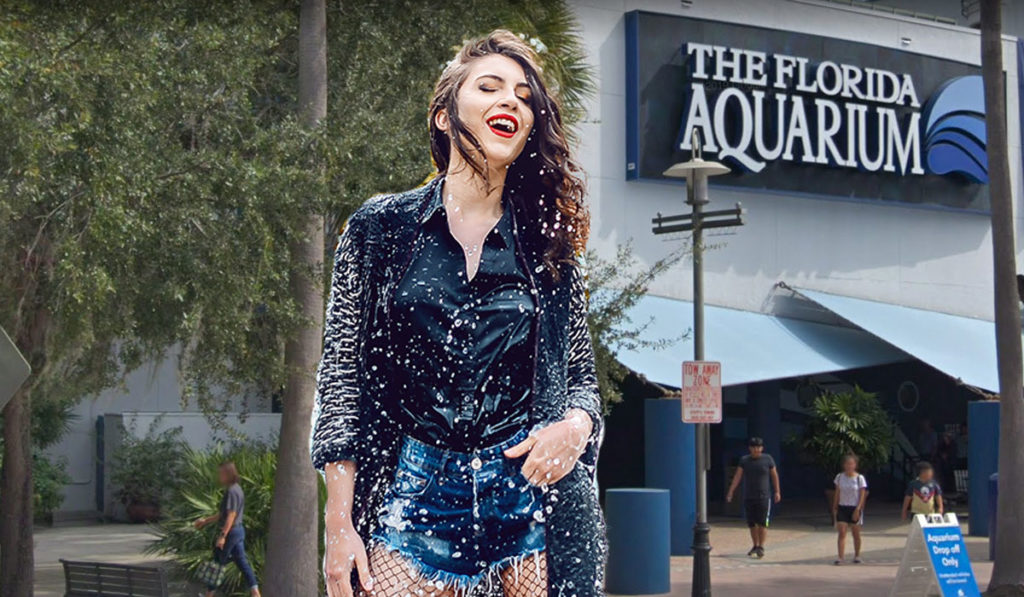 A new summer promotion from The Florida Aquarium in Tampa’s Channelside District is getting some people wet with excitement.

From now until the end of summer, The Florida Aquarium will allow free entry to anyone who shows up soaking wet. Getting caught in the Florida rain might actually lead to a walk through 250,000 square feet of family-friendly tanks and cages.

“They hired me specifically to make sure people are really wet,” said Pinno Rigio, a local high school dropout. “If someone would have told me three years ago that I would be kicked out of school because of my behavior in class and lack of respect for authority, I would have agreed.”

Rigio spends most of his day feeling up strangers’ clothes to make sure they are wet enough to receive the free ticket to the aquarium.

“Sometimes it rains and people who are dry will run out and roll on the street to get their clothes soaked for the free tickets,” Rigio laughed to himself recalling the memory. “Whenever I see that, I tell them they just aren’t wet enough. Then I tell them that if they really want to soak up their clothes, there’s a boat ramp back behind the aquarium, with easy access into the bay.”

I asked Rigio to lead me to the bay because I’m bad at following directions.

“Yeah I want to take a quick toke break, I can show you,” he said before abandoning his post.

Rigio led me back to a secluded dock, I removed my clothes and dipped them in the water while he smoked drugs out of an old aluminum can.

“You wanna hit this,” he said while trying to hand me his aluminum can bong.

“Sure,” I said so that I wouldn’t seem suspicious. While doing the drugs, I tried not to inhale but I think Rigio suspected something.

“Why aren’t you inhaling my drugs real deep?” Rigio asked while flashing me a gun that was hanging from his waist, “Are my drugs not good enough for you?”

“Look man I just wanted to get my clothes wet and see some turtles,” I said while starting to freak out. Suddenly the drugs took effect and the sky turned a lime green color. Rigio’s face melted and I could hear every radio wave and frequency within an 8-mile radius.

“You work while high on this?” I screamed out to the void before blacking out.

Next thing I know I’m tied to a chair and two men who said they were police officers were interrogating me.

“We saw you down by the docks with a man who is wanted for trespassing and impersonating an aquarium employee,” one of the cops said before putting out his lit cigarette on my eye lid. I cried in pain and screamed for them to let me go because I didn’t know anything.

“That’s rich, next you’re going to tell me that you were naked because you wanted to dip your clothes in the bay to get them wet so you could go to the aquarium for free,” one of the cops laughed before punching me in the gut. “Well I’ve got news for you buddy, that’s not really a thing.”

The cops then let me go after I promised not to come back anywhere near Channelside. The Florida Aquarium has asked me to stop telling people that they can get free tickets for showing up wet, sorry for getting your hopes up.

← Tampa watches NBA Finals, gets sadTampa lesbian couple gets famous for eating out →